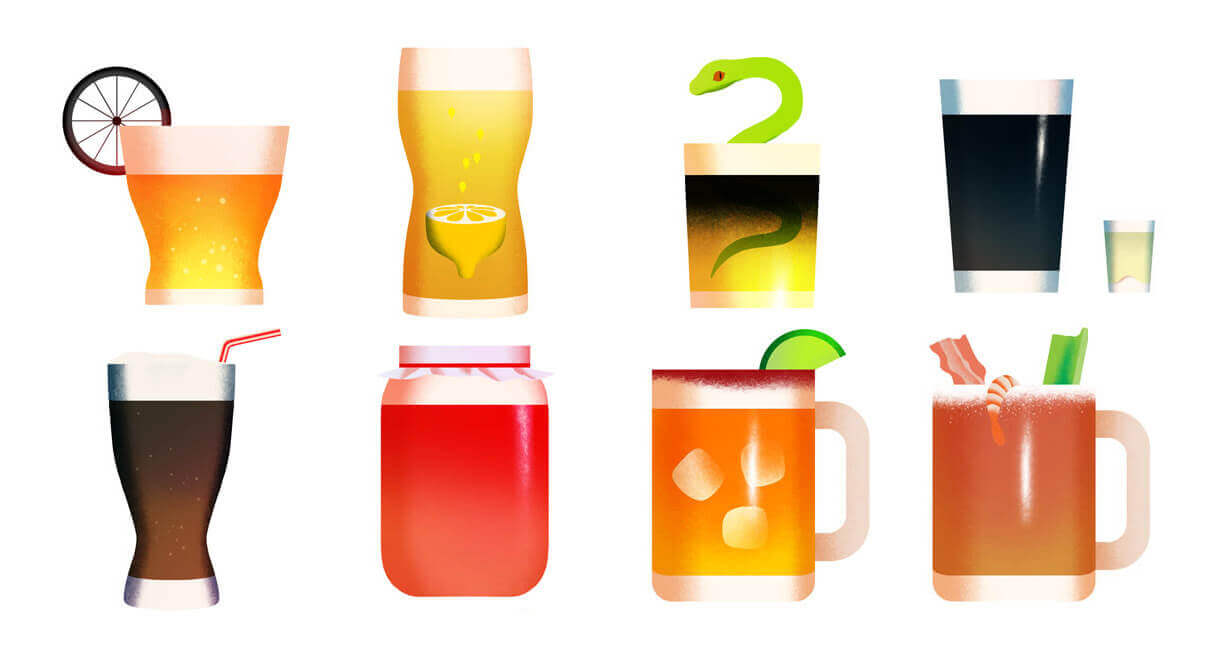 Keep the spice alive in your beer relationship.

As with any long-term relationship, sometimes you have to try new things to keep the spice alive. This applies even to your relationship with beer, one of life’s most reliable and satisfying partners. Brewers do it all the time, amping up IPAs with illicit quantities of hops, adding raspberries to stouts and cucumbers to pilsners. But for the rest of us, the best move is an aftermarket addition. Here are eleven ways to adulterate your beer.

The radler—which means “cyclist” in German—is a refreshing fifty-fifty blend of beer and sparkling lemonade or soda. The drink was invented in the early 1920s when cycling became a popular leisure activity, and its name presumably refers to cyclists’ need for a thirst-quenching, not-too-boozy beverage along their journey. While pre-blended, ready-made versions are available now, German tax law forbade the sale of bottled radlers until the 1990s, meaning they were either mixed at home or in the beer garden.

In southern Germany, radlers are called Russ and are made with Hefeweizen (the local wheat beer) and lemonade. In the north, they’re made with pilsner and lemon soda and called Alsterwasser.

Like the radler, this British-born drink is a fifty-fifty blend of beer and lemonade—or, less often, ginger ale (in which case it’s called a shandygaff). It predates the radler by more than fifty years and was a popular summertime beverage in Victorian-era London pubs. The color of a shandy depends on what beer is used; common beers include ale, porter (then it’s called portergraff), and lager (called lager top when merely topped off with lemonade). In summer, you can get bottled or canned versions from many classic American breweries like Leinenkugel’s and Narragansett.

Swap the shandy’s lemonade for hard cider and you have this popular British drink—so popular among minors that many UK pubs refuse to serve it. Like a shandy, it can be made with practically any type of beer, though it’s usually a lager in the UK and often a stout in the United States; it’s also sometimes served with a floater of black-currant syrup, in which case it’s called a “diesel” or “snakebite and black.”

In Germany, beer and Coca-Cola is a popular combination that has different names based on each different beer it is blended with: Colaweizen (hefeweizen and cola), Krefelder (pilsner and cola), Diesel (lager and cola), and Flieger (Weissbier and cola). In Austria, it is typically a blend of pilsner with cloudy orange-lemon soda, grapefruit soda, or Almdudler, an apple-grape soda infused with herbs. And in Spain, a blend of light pilsner with lemon-lime soda (such as Sprite or lemon Fanta) is known as a clara con limón.

This relatively recent invention blends the tart, funky fermented flavor of everybody’s favorite post-yoga penitential beverage with everyone’s favorite beverage, period. Try citrus kombuchas with juicy, hop-forward IPAs, or use a berry-infused kombucha to enliven a stout or porter. Start with a 75-25 ratio of beer to kombucha, then adjust to taste. Several commercial examples exist, including Lambrucha (a 3.5 percent ABV blend of Belgian lambic and kombucha) and Unity Vibration, which makes a line of beerbuchas in flavors like raspberry, ginger, and K.P.A. (Kombucha Pale Ale). Namaste.

At their most basic, micheladas are beers spiked with a little lime juice and chili powder, typically served on the rocks. That elemental structure is an excellent springboard for countless creative variations: additions often include salty and umami-laden ingredients like clam juice, hot sauce, beef bouillon, Maggi seasoning, tamarind paste, and Worcestershire sauce. Micheladas can be made with practically any type of beer, but adjunct lagers (nerd speak for “the kind of beer you can buy at the gas station”) such as Modelo or Tecate are the classics—that said, more robust beers like Victoria, Dos Equis, or Negra Modelo (all Mexican-made Vienna lagers) stand up better to more aggressive adulteration.

Berliner Weisse is a refreshing, low-ABV wheat ale that’s lightly soured with lactobacillus. Traditionally, to counter the beer’s tartness, a shot (the “Schuss” in the name) of fruit or herb syrup—usually raspberry or woodruff (a bright green forest herb)—was added to the glass post pour. The style, native to Berlin, has made its way to American breweries like Bell’s, Dogfish Head, De Garde, and J. Wakefield, but the shot is now usually added at the brewery with whole fruits and vegetables rather than at the bar with syrup. (One of the few places riffing on the traditional syrup service is the NoMad Bar in New York, where the house Nomader Weisse, brewed by Brooklyn’s Evil Twin, is served with sidecars of raspberry and basil syrups.) At home, try adding fruit and herb syrups to these beers a squirt or two at a time.

Can’t choose between a Bloody Mary and a michelada? This cocktail is the best of both worlds—a tomato-juice-based mash-up of the two. It can be fortified with just beer (like a pilsner or Vienna lager) or with beer and a shot of tequila, mezcal, or vodka. Garnishes can include classic celery sticks and pickled string beans or a meaty shrimp and smoked bacon. Like the michelada, the possibilities are practically endless.

The flip is an entire category of historic cocktails traditionally made with beer, rum, and spices, then heated with a scalding iron to froth—or “flip”—the drink. But since the early nineteenth century, the beer has been dialed back or left out entirely, to be replaced with eggs and sugar in greater and greater quantities. (Jerry Thomas includes a chapter on flips in his seminal How to Mix Drinks, or the Bon-Vivant’s Companion, first published in 1862.) To re-create the historic hot flip, pour a bottle of dark ale into a saucepan over gentle heat and slowly whisk in one egg, an ounce or two of simple syrup, and a shot of rum. Froth it by flipping the concoction back and forth between two mugs; serve with freshly grated nutmeg and cinnamon.

This working-class shot-and-a-beer combo is a bartender favorite. Could be an icy bottle of Miller High Life with a shot of Old Crow bourbon or a tall glass of Blanche de Bruxelles beer with a sidecar of Icelandic Brennivín. There aren’t any rules, though pairing cheap with cheap and fancy with fancy usually works. One approach is to pick beers that contain the same malted grain as the spirit—a dark rye ale like Firestone Walker Wookey Jack with a shot of Old Overholt rye whiskey, for instance—so that the flavors and textures perform a neat echoing effect. Then there’s the question of how to drink it. Knock back the shot and chase it with the beer? Sip back and forth on each in turn? Or drop it in, like a depth charge? For the latter, classic examples include the Irish Car Bomb (stout with Irish cream and whiskey) and the sake bomb (Japanese lager with a shot of sake), as well as the Jägerbomb (something pilsnerish with a shot of Jägermeister, though beer’s role in a Jägerbomb has been relegated to a quaint throwback ever since energy drinks were invented). There’s also the more flamboyant Flaming Dr. Pepper, a combo of amaretto and overproof rum set on fire. Just don’t burn the house down.

This cocktail, also known as a Mexican Bulldog, a Coronarita, or a Margarona, is an oversized frozen margarita topped with an inverted bottle of beer, which through a partial vacuum gradually releases more and more beer into the glass as the margarita is consumed. It’s especially popular at Tex-Mex restaurants, at chain restaurants like On the Border and Margaritas, and at unscrupulous neon-lit nightclubs the world over.