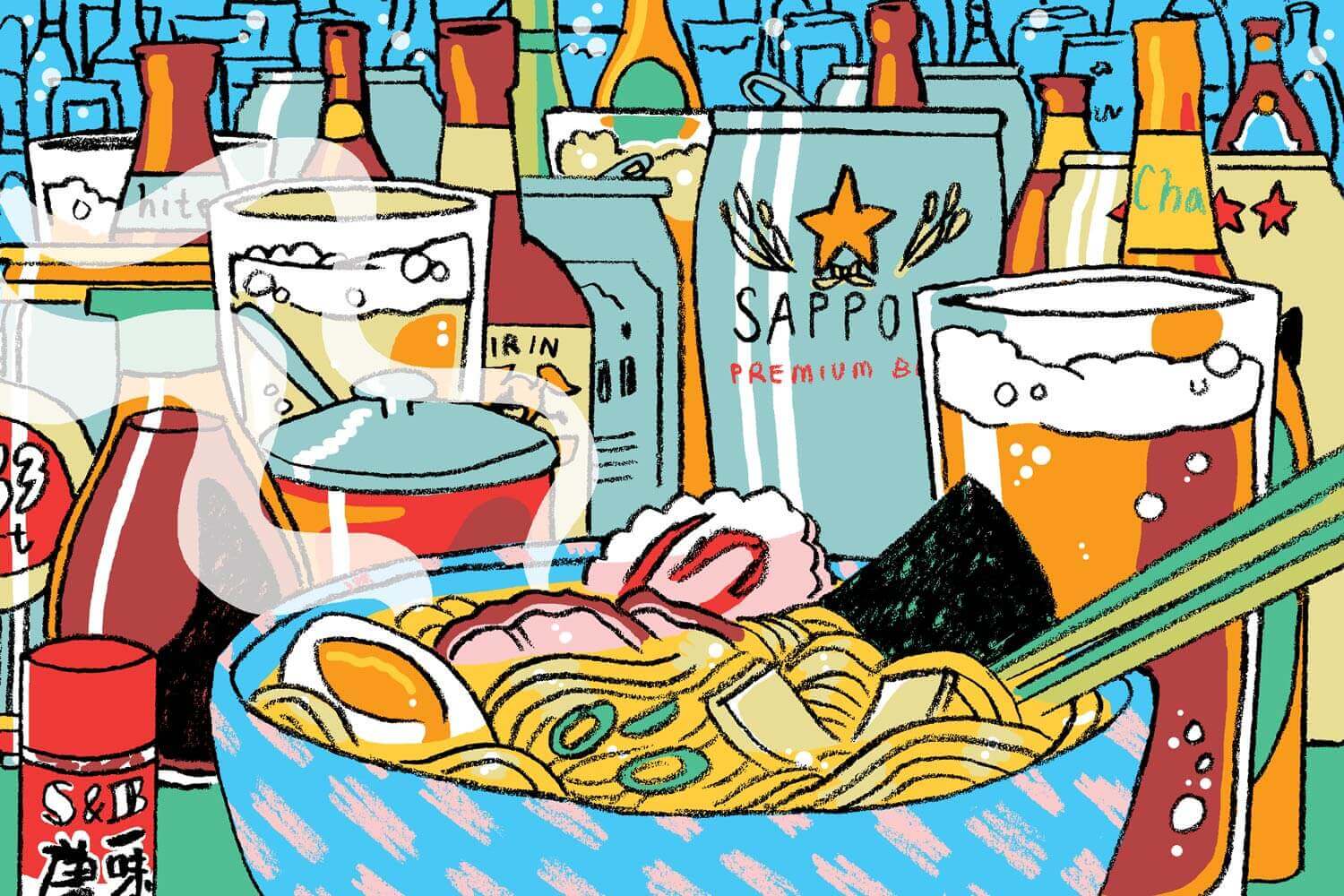 What to drink at ramen counters, Sichuan restaurants, Korean barbecue joints, and the like.

You may likely frequent ramen counters, Sichuan restaurants, Korean barbecue joints, and the like. These places aren’t typically known for their beer selection, but they usually offer at least a small selection of pale lagers from their cuisine’s respective homeland—the Asahis, Singhas, Tigers, and Tsingtaos of the world. Lord knows we’ve spent our time drinking them and not thinking that hard about it. But what are these beers, exactly?

First, a little background on style. Virtually all of them are light lagers alternately referred to in beer-speak as international pilsners, international lagers, or export lagers. They are straw colored and mellow with a fluffy white head, closely modeled on the original Czech and German pilsners which are brewed with malted barley, mildly aromatic hops, and cold-fermented lager yeast. It’s the most copied beer style in the world and what most of us, and particularly our parents, think of when we think of beer: beer-flavored beer.

Why is this style so ubiquitous? A lot has to do with concentration of the beer market, which is now globally controlled by only a small handful of parent companies. But it also results directly from Victorian-era European imperialism. East Asia has little beer making tradition, but many European companies set up breweries throughout the continent in the late nineteenth and early twentieth centuries. Many of these still produce beer today. That means that much beer made today, from China to Denmark to South Korea to Germany, is nearly identical—a light bodied golden lager with low bitterness and very little malt or hops flavor.

Unlike the traditional pilsners of the Czech Republic and Germany, Asian-style lagers are often brewed with additions—adjuncts, in beer speak—like corn and especially rice. Adjuncts are common throughout Asia and North America (Budweiser is made with rice) because the high protein barley grown there made flabby, heavy beers. Adjuncts were used to lighten the body for a drier, lighter beer. They still contain some malted barley so, despite rumors to the contrary, they are not gluten free.

We found many of these beers nearly indistinguishable from one another, though some of the Japanese examples were notable for their extremely dry, almost ephemeral taste. Others were more robust, though overall they don’t show off any particularly exciting flavors. This isn’t necessarily a bad thing: crisp, clean, and cold can be exactly what you want to pair with the often-intense cuisines of the continent.

Asahi is the premier beer company of Japan. It was founded in the late nineteenth century and sold Japan’s first bottled and canned beers, released in 1900 and 1958 respectively. The company has evolved and expanded over its lifetime and today it produces a wide variety of different beers, most in a pale lager style. The most popular is Asahi Super Dry, marked by a pronounced dryness resulting from high proportions of rice in the mash. This is a relic of Japan’s so-called “Dry Wars” of the 1980s where breweries pushed for more and more lightness of body and crispness of flavor in their beers.

Kirin is Japan’s second largest brewery. It’s named after a legendary Japanese animal that more than a little resembles a dragon crossed with a unicorn. Like Asahi, the brewery dates to the nineteenth century. Its parent company was the Spring Valley Brewery which was founded in 1869 by a Norwegian brewer named William Copeland. Today Kirin is mostly known for Kirin Ichiban, an unpasteurized lager that is light and dry with very low bitterness. Other Kirin beers include Shibori Stout—in fact a dark lager, not an ale like actual stouts—that’s a stand-in for Kirin’s now-defunct eight percent export stout.

For decades beginning in 1906, Sapporo and Asahi were part of the same company, incorporated as the Dai Nippon. That entity dissolved in 1949 and split into Asahi and Sapporo. Today Sapporo is a popular brand throughout Japan and the United States with its Premium beer, Yebisu beer, and Black Label beer. Most are practically indistinguishable from one another though Yebisu is a 100 percent malt beer with a fuller body and flavor. In 2016 the company released Sapporo Premium Black, a dark lager and the brewery’s first new beer in over a decade.

Based in Okinawa, Orion is a relatively small volume brewery. It’s known primarily for its “Premium Draft Beer,” a 5 percent lager with a clean, refreshing flavor and little to no hop or malt character. Like many international lagers, the beer is remarkable in its dry, thirst quenching qualities that pairs perfectly with many types of Asian food simply because it does not interfere with other flavors—you’ll find it on the menu at Momofuku Noodle Bar and Mission Chinese Food in New York for those reasons.

This Seoul-based brewery is the largest in South Korea, specializing in rice lagers and soju. The primary brand simply called Hite is a sweet, golden rice adjunct lager. It is by a wide margin the most popular beer in South Korea. Other Hite brands include Max, an all-malt beer, and Stout, essentially a Guinness knock-off.

OB literally stands for—ahem—Oriental Brewery. The brewery produces a wider range of styles than Hite but maintains a lower market share in Korea than its much larger competitor. In addition to the OB line of rice lagers and light beers, the company makes the Cass brand beers which are often sold in Korean restaurants and markets stateside.

Singha is the most famous beer of Thailand. The brewery is owned by Boon Rawd Brewing Company, which also produces Leo, one of Singha’s competitor brands. It has close ties to Carlsberg Group of Denmark and uses many of Carlsberg breweries around the world to brew its beer. The set up works because Carlsberg and Singha are nearly indistinguishable from one another—both are mildly flavored pale lagers.

Chang is Thailand’s other national beer brand best known for its green, elephant adorned labels. Thai Beverage is its parent company and ironically also at one point had close ties to Carlsberg though the partnership is no longer in place. Chang Classic is the flagship brand with a smattering of other brands brewed at the company’s three facilities. ThaiBev also produces Mekhong, a whisky or rum-like liquor, in Thailand and owns distilleries throughout Europe and Asia.

Tiger is the requisite 5 percent pale lager first brewed in Singapore in the 1930s. Today the brand is owned by Heineken Asia Pacific and exported around the world. The company recently introduced several spinoff brands including Tiger Crystal, a lighter version of Tiger, and Tiger White, a Belgian-ish wheat beer with orange zest and coriander.

Lao Brewery Company is the official brewery of Laos, a French colony until 1954. The brewery makes three types of beer—Beerlao Lager, Beerlao Dark, and Beerlao Gold. The Lager is a Carlsberg-esque 5 percent-ish pale lager, brewed with rice. More interesting is Beerlao Dark, a 6.5 percent dark lager similar to the Vienna lagers that are now ubiquitous throughout Mexico like Negra Modelo and Victoria. Beerlao Gold is the company’s newest lager. It’s made with a Laotian rice called Khao Kai Noy, and has a 5 percent ABV.

Germans and British expatriates established Tsingtao in 1903 and it is now China’s second largest brewery. (The largest, Snow, is much less common in the United States.) The original recipe adhered to the Reinheitsgebot German purity law (only water, hops, and malted barley) but since the 1990s has contained a portion of rice in the formula. Tsingtao was introduced to the States in the 1970s and is now the most popular Chinese brand sold here. Similar to the other beers in this guide, it is a 4.8 percent pale lager with little distinguishing flavor.

This Vietnamese beer was first brewed by French colonists using German recipes and ingredients. Originally called 33 Beer, name from the 33-centiliter bottles it was originally bottled in, it was popular with American GIs during the Vietnam war. The name was changed to 333 Export after the fall of Saigon in 1975. Today 333 is still made by Sabeco while a revamped version of 33 Beer has been introduced as well. The company, which is mostly state owned but partially controlled by Singapore’s Heineken Asia Pacific, is the largest brewery in Vietnam and produces a handful of others brands, including Saigon.