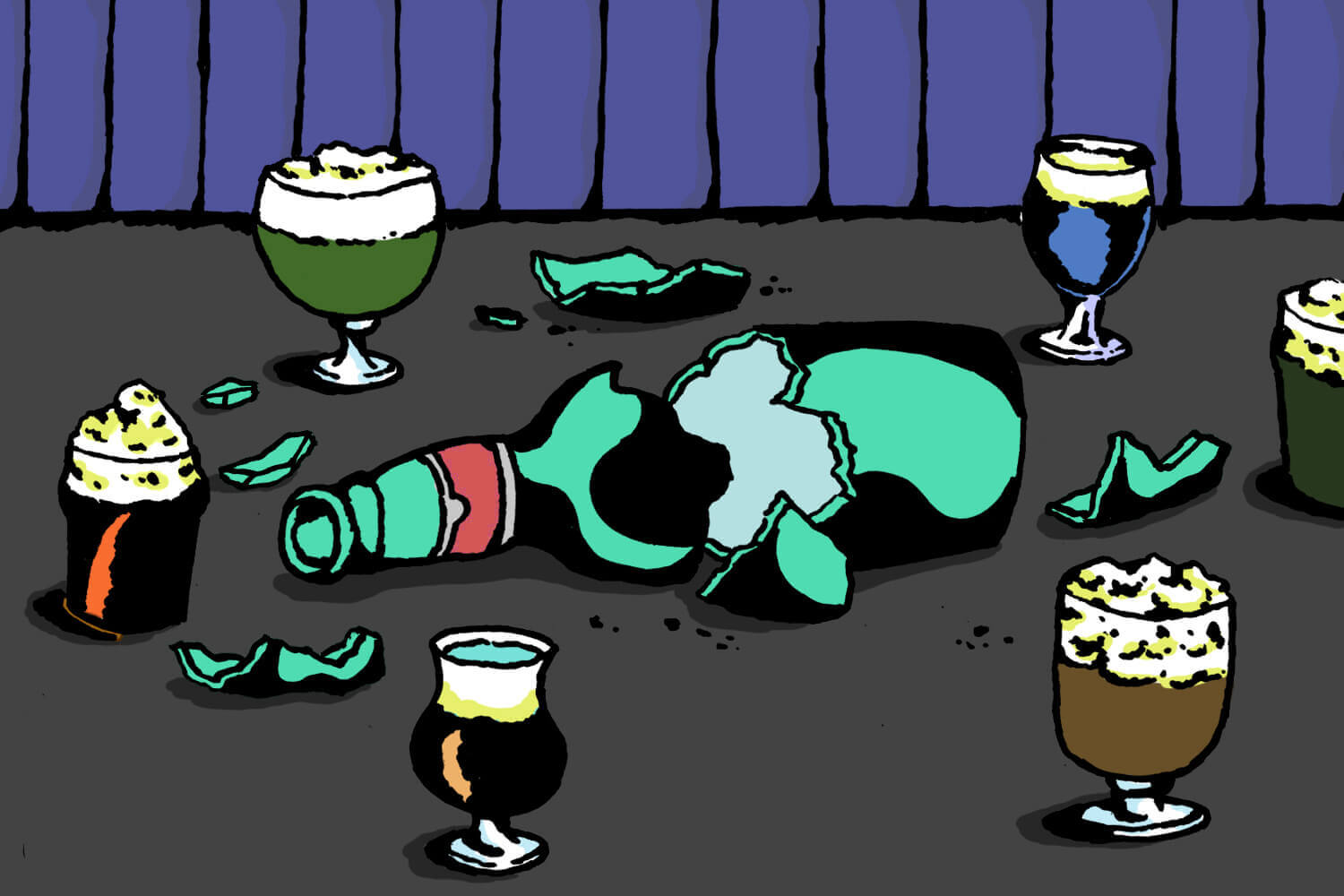 Between the cold days and the prolonged nights, fall and winter generally feel like a time for dark, warming beverages—hefty red wines, stiff brown spirits, and, perhaps most of all, robust dark beers. But all dark beers don’t necessarily fit that mold. “Dark beer” is an overly broad and inexact category encompassing everything from easy-drinking German Schwarzbier to bold Belgian quads. (And because of that breadth, there are plenty of dark—or darkish—beers, like Dunkels, Roggenbiers, Eisbocks, and wee heavys, not included here.)

Some dark beers are spicy and boozy; some are sprightly and refreshing. Here’s a guide to the gamut.

Porter dates back to eighteenth-century England, where it was by and large the most popular beer, a status it maintained up until World War II when lighter ales and lagers became ubiquitous. (The name porter probably originates from its early popularity among working-class dock builders and other haulers.) The beer’s dark brown color is the result of roasted malts, which were historically unevenly malted, lending an acrid, slight smokiness to early porters. The porter category is also a hybrid style: while most are warm-fermented with ale yeasts, Baltic porters are traditionally cold-fermented with lagering strains.

Modern English porters are subdued but robust, with a dry, almost acidic finish. Like stouts, porters have morphed and transmuted into myriad sub-categories and regional styles over the centuries, but the original is a mild dark beer with roasty flavors and gentle bitterness from grassy Fuggle and Golding hops.

American porters are not quite as soft and sweet as traditional English porters; they lean toward the rich and complex end of the spectrum. They’re usually dark brown to black in color, with a strong malt flavor and aromas of coffee, chocolate, and sometimes citrusy hops. Most are around 5-6 percent ABV and medium bodied.

Baltic porter is a spinoff style of the original English porter. It took root in England around the late eighteenth- and early nineteenth-centuries, and was initially influenced by the hefty imperial stouts commonly exported to the regions around the Baltic Sea. By the nineteenth century, Baltic porters were also being brewed in the Baltic states themselves. This marked a turning point for the style, which then went from being a warm-fermented ale to a cold-fermented lager (the fermentation style favored in the Baltic region). Today, most Baltic porters are cold-lagered; strong ale-fermented porters are considered imperial porters instead.

Stouts are dark, robust ales who can trace their lineage directly to porters. The term “stout porter” was initially used to describe boozy, rich porters; it was eventually shortened to just “stout.” Today, the term describes a broad category of substyles that vary from frothy, sweet, and light to rich, robust, and complex.

The most popular stout in the world is Guinness, the archetypal dry stout that’s dark and silky but also quite light in body and booze—only about 4 percent by volume. Like all stouts, the black color comes from dark-roasted malts that lend bitterness and a dry, crisp finish. Dry stouts like Guinness are often poured on draft with nitrogenated gas (rather than pure carbon dioxide), which imparts a gentle sweetness and an exceedingly smooth, creamy body. One subvariety is the oyster stout, made by adding calcium-rich oyster shells during the boil. The shells’ original role was probably as a filtering mechanism (much like the “protein raft” used to clarify consommés), but it also produces a pronounced, pleasant minerality.

Milk stouts—sometimes called sweet stouts—are similar to dry stouts, but made sweet by the addition of lactose, or milk sugar. The lactose imparts creaminess and sweetness but doesn’t lend any additional fermentable sugars (saccharomyces can’t process milk sugar), keeping the ABV low and the beer relatively light and chuggable. Like dry stouts, milk stouts are sometimes served on draught with nitrogenated gas.

The addition of oats, rich in proteins and lipids, is yet another way to make a creamy-bodied stout. The style was popular in Victorian England, fell out of favor during the twentieth century, and is now somewhat common again with American brewers. In terms of sweetness and creaminess, it falls somewhere between dry and milk stouts.

American stouts are distinguished—surprise! surprise!—by a pronounced citrus hoppiness. They’re often much roastier than dry, sweet, and oatmeal stouts, and a little heftier, too, with ABVs around 6-9 percent. Some are infused with coffee and chocolate, amplifying the roasted malt’s inherent flavors.

Export stouts—also known as foreign or tropical stouts—were originally hearty, high ABV stouts developed in the British Isles for export to the Caribbean and other tropical climates (the high alcohol and robust malts made them particularly well-suited for transoceanic voyages).The original was made by Guinness, first named West India Porter and later renamed the Foreign Export Stout, which dates back to the early 1800s. Export stouts are full-bodied and robust, with a more pronounced bitterness than dry and sweet stouts, and about double the ABV (around 5.5–7.5 percent).

Imperial stout is a rich, robust, and powerful beer usually clocking in between 8 and 12 percent ABV (but can sometimes go higher, up to 15–17 percent). The style originates in late eighteenth-century England where strong (>10 percent ABV) stouts were brewed and shipped to Russia and the Baltic states. Modern iterations are sharp and bitter but with a residual sweetness that can be harmonizing at best and cloying at worst. The style is closely related to—and a direct influence on—Baltic porters.

One prevalent (but annoying) modern American trend is the imperial stout variant release, a serial offering of a common base beer gussied up with different adjuncts like chocolate, coffee, chili peppers, or maple syrup. The most widely available example is Goose Island’s Bourbon County Brand Stout and its variants, which rotate each year. Other notable versions are 3 Floyds’ Dark Lord and Cigar City’s Hunahpu’s, both of which have their own festival release days that attract thousands of beer nerds.

Strong ales are made boozy not by fortification or distillation but by making an extremely sweet, sticky wort (unfermented beer). This results from a thick slurry of fermentable sugars—mostly from malted grain but sometimes from adjuncts like Belgian candi sugar—added to the brew kettle before the beer is fermented.

Old ale is an historic British term for a vague category of dark strong ales (>6 percent ABV). They’re usually dark reddish-brown in appearance, with robust, warming flavors of malt and booze. As the name suggests, they’re aged for a prolonged time before being released. Historically, old ales were blended with younger, weaker beer, but now they’re most commonly bottled, sold, and consumed at full strength, with many American versions reaching well into the double-digit ABV range.

Barleywines are dark reddish-brown strong ales that originated in England in the mid-nineteenth century. The first commercial example to be called barleywine was Bass No. 1, a boozy, sweet ale meant to mimic the flavors of fortified wines. They’re nearly indistinguishable from old ales—some even argue the only difference is name—but barleywine is a much more popular term in America than old ale. They can age beautifully for many years, developing sherry-like aromas of toffee, dried fruit, and caramel. Most are well over 10 percent ABV.

This beer is exactly what its name implies: a dark strong ale made in a traditional Belgian style. Trappist breweries—a certified appellation that covers only monastic breweries within the Trappist order—usually call these quadrupels, or quads, following the nomenclature of Singels, Dubbels, and Tripels, a reference to beers of increasing strength. But the style isn’t codified, and breweries outside the appellation may also refer to them as quads or Belgian-style strong ales. Because of proprietary yeasts and idiosyncratic brewing methods, the characteristics vary from brewery to brewery, but in general, quads are rich, malty, and boozy (>10 percent ABV), with complex aromas of dark dried fruit and spices. They’re often chewy and full-bodied, though some are effervescent, even vibrant. Most are bottle-conditioned with added sugar and yeast.

More on Cascadian dark ales/black IPAs in our Guide to India Pale Ales.

Though not a codified style, dark sour ales have become increasingly popular among American breweries. Most begin stout- or porter-like before undergoing some degree of wine barrel-aging, mixed fermentation (usually with brettanomyces), and bottle conditioning. The style is divergent, but overall dark sour ales are mouth-puckeringly tart, with funky aromas and rich flavors of char, dried fruit, and tart cherries.

Dark milds are traditionally low-ABV session ales. They’re typically brewed with chocolate or black malts and are gently hopped, much milder than pale ales and IPA’s. The style dates back several centuries to at least the eighteenth century. Like many other styles, they fell out of favor during the mid-twentieth century, but are experiencing something of a resurgence thanks to the craft beer boom of the last twenty years.