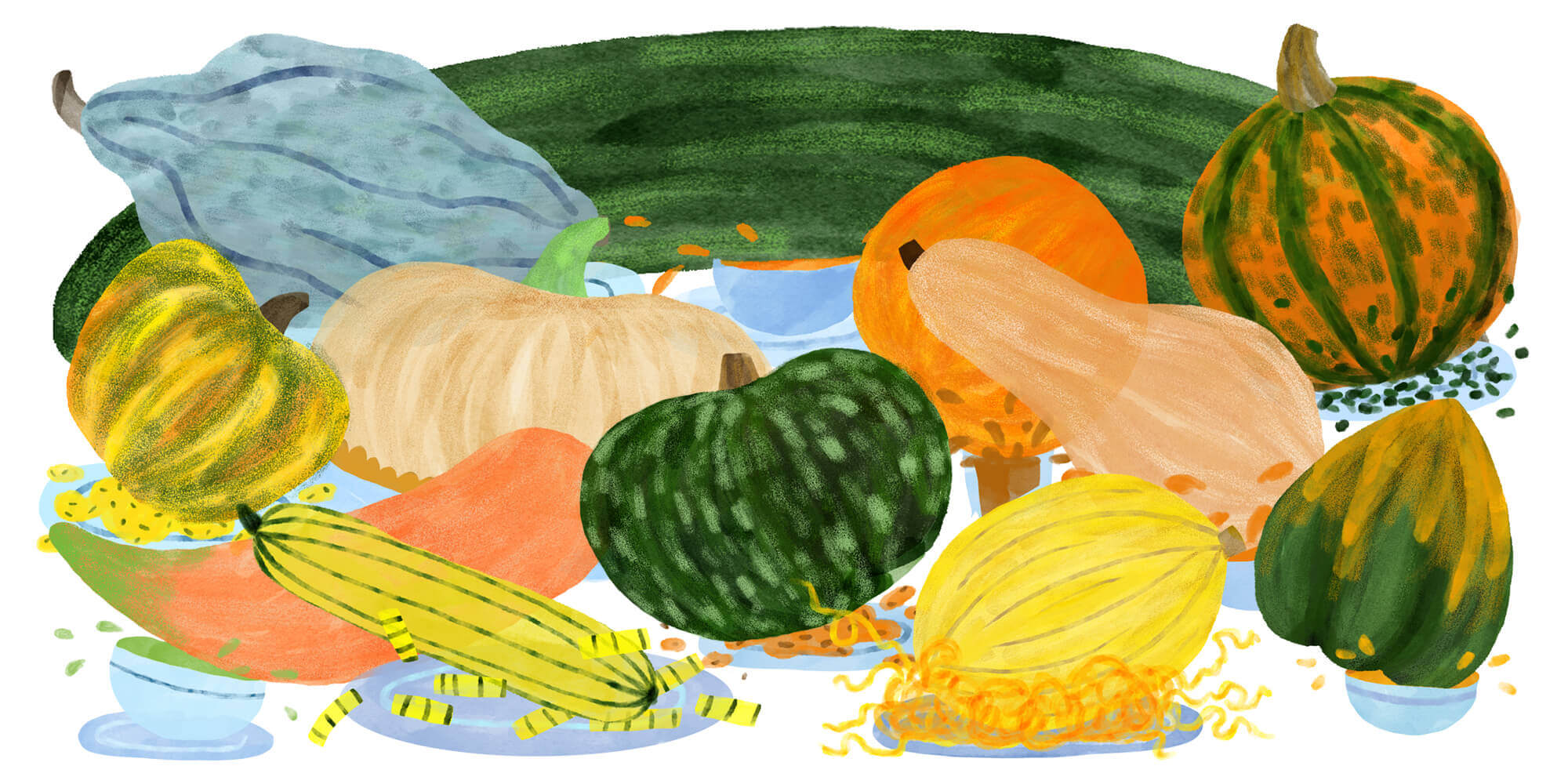 Winter squash is a many-splendored thing: more versatile, with more character than its lovely summertime cousin. But with all the variation in shapes and sizes of winter squash, it helps to bring a little more know-how to the market with you when you’re shopping. Some are easier to prep than others; some need more butter than others; some are darling and cute, others hulking and cavernous. Here’s what you need to know about winter squash, and how best to use them.

The Waltham Butternut—the more specific name for the most commonly available butternut squash—is a sweet, dense, moist squash, ubiquitous in puréed soups of the late nineties and early aughts. It has a smooth tan skin, thin enough to remove with a vegetable peeler; a small seed cavity; and a long, seedless neck. That flesh lends itself to lots of preparations: dice it, steam it, and purée it; chop it into hunks and throw it in the oven; shave it on a mandolin and toss in a salad.

Keep your eye out for newer varieties, like the honeynut, developed for size and flavor by Michael Mazourek of Cornell University in conjunction with Dan Barber and the team at Blue Hill at Stone Barns. The flavor of butternut squash improves as it ages, first hardening and sweetening in the warmth of the field then in the cool of a root cellar, for at least a few weeks and up to several months.

Before the spiralizer took zucchini by storm, people looked to spaghetti squash for their fake-carb fix, which has a naturally stringy texture that emerges while cooking. Halve one through the stem end, drizzle with extra-virgin olive oil, season with salt, and roast it, cut-side down, until a fork can pierce the skin with just a bit of resistance. Hold the hot squash with a kitchen towel and gently scrape the flesh lengthwise with your fork to release the strands. Top with tomato sauce and shower with parm.

One of the least intimidating, and delicious, varieties of winter squash, delicata is an old heirloom, dating to the 1890s. While technically classified as hard, delicata’s edible skin softens when cooked. Its flesh is sweet and mild, and with an average size of about one pound, delicata makes the perfect boat for stuffing or rings for roasting. Thinly sliced and briefly salted, the raw squash makes a snappy addition to salads and slaws.

Ubiquitous, if not the most delicious, winter squash, acorns were probably first domesticated by native North Americans and continue in popularity today. Their skin is softer than other varieties, making them prone to nicks and bumps, and their flesh yellow and fibrous when cooked. While they are easy to prepare—simply halve, remove their seeds, and roast until tender—much of the acorn squash that makes it to the mass market has been selected for durability and small size rather than flavor or sugar content.

The tradition of brewing beer infused with squash is as old as America, and this small, sweet variety of pumpkin typically used in desserts has found its way into malty beers. The frenzy of pumpkin-spice everything, however, has led to a bunch of cloying, nutmeggy, cinnamon-y beers; try Rogue Farms Pumpkin Patch or Ballast Point Pumpkin Down for a fall brew without the latte effect.

The bumpy green skin of the kabocha squash, speckled or striped with off-white blemishes, gives way to hard, orange flesh.  That flesh is dry and flaky and takes well to moisture—particularly butter or cream—and it turns very sweet once cooked.

Kabocha is great cut into hunks and roasted at high heat, or braised with Chinese red flavors: star anise, cinnamon, soy sauce, and michiu. Anita Lo uses the Uncle David’s Dakota Dessert variety of kabocha on her dessert menu; she purées the cooked squash with ginger and layers it with mascarpone and pumpkin-seed tuiles.

“The blue Hubbard is the potato of the squash world,” says chef Justin Smillie of Upland in New York. “It has the perfect mix of moisture and dryness.” The shape of a giant, fat lemon, dark orange flesh hides behind a dusty blue rind. He braises his blue Hubbards in dashi, and also recommends treating it as you would a potato: roasting it, baking it, searing it, or frying it. “The flesh has an earthen and woodsy aroma that pairs well with hearty game meats,” he says. “Dare you to make gnocchi with it.”

The color of a butternut squash but the shape of a smooth, flattened pumpkin, this variety is named for its likeness to a wheel of cheese. Ken Ettlinger, a seed saver from Long Island, New York, describes it as the “granddaddy” of the varieties used for canned pumpkin—and, in the 1970s, the heirloom variety was almost lost. Fortunately, Ettlinger trekked to the few remaining farms growing the pumpkins, collected the different strains, and kept the seed going, eventually helping it become commercially available for growers around the country. Since the flesh of the cheese pumpkin is denser and more aromatic than other pumpkins, it’s great for making custard—especially the kind that fills a pumpkin pie.

Pumpkin pies, by the by, are not explicitly made from pumpkin. Cans of pie filling that are labelled “solid pack pumpkin” can be a mix of any hard squash, as long as it is 100 percent squash (without seasonings). The Dickinson pumpkin, a grandchild of the Long Island cheese pumpkin, is the primary variety found in Libby’s, which accounts for about 85 percent of the U.S. market of canned pumpkin pie filling.

The North Georgia candy roaster is a banana-shaped squash traditionally incorporated into the Three Sisters planting method—in which corn, pole beans, and squash are grown together in the field—by the Cherokee Nation in Appalachia. Chef William Dissen of The Market Place in Asheville, North Carolina, likes to pickle it, swapping out the traditional daikon in kimchi for the candy roaster. You can also cook the fine, orange-fleshed squash as you would a sweet potato.

Kakai pumpkins, with their bright-orange skin and green striping, are often sold as decorative pumpkins—but the good stuff is inside of it. The seeds inside are only one of the few plant-seed types that have omega-3 fatty acids—and because they are hull-less, they make a great snack when salted and toasted. And, according to Greg Woodworth of Stony Brook Wholehearted Foods, they make particularly good pumpkin-seed oil. But don’t mistake kakai seeds with the majority of what are sold as pepitas on the commercial market—which, according to Woodworth, may come from a type of melon. Typically, after the seeds have been harvested, kakai flesh is worked back into the land to feed the soil. In the future, Woodworth hopes that the flesh can be converted into animal feed or dried into a powder for use in culinary applications.

Take an acorn squash, add a sweet dumpling squash—and behold the carnival squash, the best of both worlds. Acorn, an old-school variety with a savory-sweet flavor, pulpy texture, and thin green skin, is not well suited for long storage. Fortunately, when crossed with sweet dumpling, a softball-sized squash with a silky texture and longer shelf life, you get a true, lasting marriage: a squash with pixelated, hardy skin and sweet, yellow, fine-textured, flesh. The hybrid doesn’t need much to make it delicious: simply scoop out the seeds and roast it in wedges.

The Long of Naples is called long for a reason; these monsters, which are notably grown at the French Laundry by Aaron Keefer, can swell to seventy or eighty pounds and up to three feet long. The shape and color of an overgrown zucchini, they begin to turn golden at end of the growing season. Despite the length, its seed cavity is only as large as a man’s fist, yielding up to sixty pounds of usable squash from a single fruit. The flesh is a deep, dark orange and a tad stringy, making it perfect for purées and soups. When cured properly, Long of Naples becomes sweeter-tasting and more aromatic than a butternut.