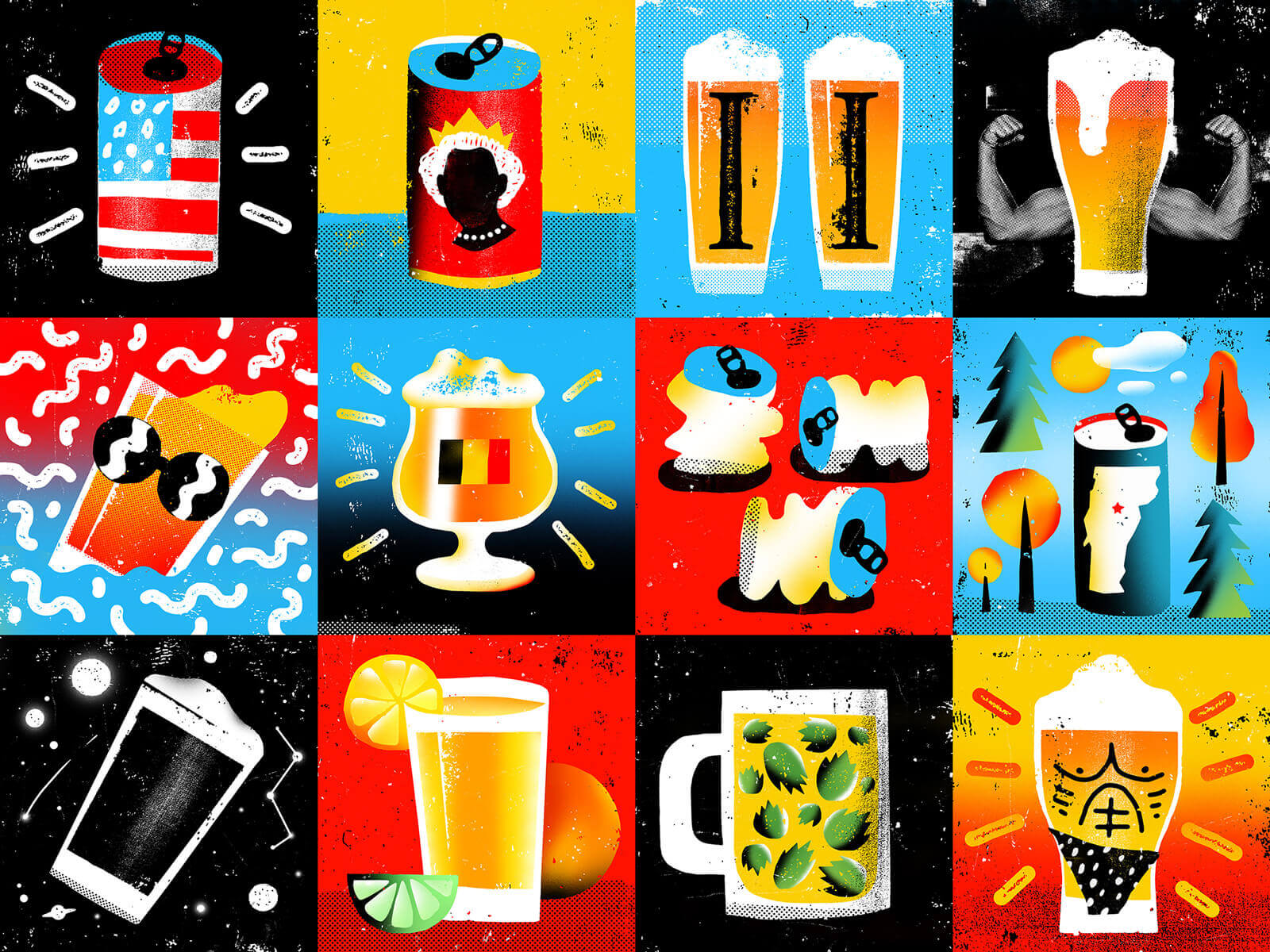 What you need to know about the most popular style of craft beer.

Like it or not, India pale ales have become synonymous with American craft beer. The fruity hop bombs are known for their aggressive bitterness, elevated alcohol content, and heady, over-the-top hop flavors. They’ve also inspired the hopification of nearly every other traditional beer style, from saisons and Scotch ales and to pilsners and porters.

They are, broadly speaking, the single most popular style of craft beer, accounting for nearly 30 percent of all sales annually—that’s over 150 million gallons of beer consumed each year. There are more than a dozen different subgenres of the hoppy style, with new ones popping up nearly every year—and that’s to say nothing of unrelated, off-the-map variants on the style that small brewers can’t seem to stop themselves from making. Here’s a guide to help you tell what kind of IPA experience awaits you.

What we think of today as the modern American IPA has its genesis in Chico, California, circa 1980, when the invention of Sierra Nevada’s pale ale singlehandedly launched the craft beer revolution. Sure, Sierra Nevada pale ale is nominally not an IPA, and there were other hoppy American ales that came before it, notably Anchor Brewing Co.’s Liberty Ale and Ballantine IPA. But Sierra Nevada pale ale’s bright, citrusy, hop-forward flavor is the template for all modern American IPAs that followed in its wake. Decidedly bitter and hoppy, American IPAs showcase New World hop varieties like columbus, chinook, and citra—which impart flavors of resin, pine, and tropical fruit rather than the grassy, spicy flavors of British and German hops. American IPAs are typically less malty than the original British IPA, with a drying finish and a crisp, clean fermentation profile.

The original English India pale ales were supposedly brewed with abundant hops as a preservative for shipping across the seas to India. And while there’s a lot of mythology—and, frankly, bullshit—surrounding the origins of the style, one can only imagine that those historical beers—if they did indeed round the Cape of Good Hope in wooden barrels with no climate control—tasted nothing like modern English IPAs, which are downright tame by comparison. The hallmarks of the style include a gentle, grassy bitterness from English hops like fuggle and goldings and a pronounced maltiness that’s often absent from American IPAs. They’re usually between 5 percent and 7.5 percent alcohol by volume (ABV).

The distinguishing feature of a Double IPA is its intense hoppiness. Often it’s paired with strong malt flavors, which means more fermentable sugars, resulting in a heftier body and an elevated ABV (typically between 8 percent and 10 percent). Like American and West Coast IPAs, the style is very hoppy and bitter but with some residual sweetness and added complexity. DIPAs are clean with bright, refreshing flavors, which makes them more suited for chugging than sipping—sometimes regrettably so.

Basically the same as a DIPA but with the ABV sometimes turned up to 11 (or higher!). Huge beers with overwhelming flavor.

Try these: Alpine Exponential Hoppiness, Other Half All Green Everything, Evil Twin Molotov Cocktail

Now more a state of mind than a geographical indication of style, West Coast IPA took the basic American IPA and amped up the hops, alcohol, and IBUs (international bitterness units). The style is now brewed worldwide but it arguably originated in Southern California, where breweries like Stone, AleSmith, and Ballast Point flourished beginning in the mid-1990s. The style is marked by a bracing bitterness and wave after wave of juicy citrus aroma.

While there are a couple dozen beer styles typical to Belgium, IPA certainly isn’t one of them. In fact, the beer wasn’t even popular there until the early 2000s, when American brewers began exerting an outsize influence on the greater craft beer world. But now Belgian and American brewers are embracing these American-style hoppy beers spiked with the fruity, spicy flavors of Belgian yeasts–the style is even a Beer Judge Certification Program-certified subcategory. Whether they’re made in Belgium or the States, Belgian-style IPAs are fermented with Belgian yeast strains, which create esters that produce assertive banana, pear, and clove aromas (think Hoegaarden)—which can sometimes clash with equally aggressive hop aromas. Most Belgian IPA’s are quite boozy, around 8 percent ABV.

Vermont has more craft breweries per capita than any other state, so it’s not surprising that a lot of great beers are made there. What is surprising, though, is that despite having very few hop farms, the Green Mountain State produces some of the most hyped and delicious IPAs in the world. The Vermont style is fruitier and considerably less bitter than West Coast IPAs—the result of adding a larger proportion of hops after the wort cools rather than during the boil—making it easy drinking and crushable. Most are produced in tiny amounts, which, in conjunction with their high demand, has led to a growing black market for beer. As a side note, most Vermont breweries wouldn’t call their own beers “Vermont-style IPAs”—outsiders recognize the style for having a set of similar characteristics—but they might just say IPA.

A contentious style that’s heavily influenced by neighboring Vermont breweries, Northeast-style IPAs are freakishly soft and juicy with huge hop aromas of grapefruit, tangerine, pineapple, and cantaloupe but little to no bitterness (again, a result of massive post-boil hopping). They’re commonly cloudy—some brewers are rumored to add flour to exaggerate the haze—and you’re likely to wait in extremely long lines, often in the middle of nowhere, to buy them. Some taste like straight-up hop candy creamsicles while others are structured and heady. Many contain a blend of American and Australian hops and, like Vermont IPAs, are packaged in 16-ounce aluminum cans with fun, colorful labels. Because they’re unfiltered and packed with extremely ephemeral hop aromas, they usually expire within a few weeks. Note that very few breweries explicitly call their beers “Northeast style,” though you’re more and more likely to see those words on cans, bottles, and chalkboard menus in the near future.

A true contradiction in terms (remember, the P in IPA stands for “pale”), the Black IPA is another contentious riff on IPAs that has as many ardent fans as dismissive detractors. Also known as

Cascadian dark ale—it may have originated in the Pacific Northwest’s Cascade Mountains—the style is dark, dank, and robust, like a mossy, pinecone-strewn forest floor. The charcoal color comes from roasted malts, the same kind that make Guinness black.

These are little beers with big flavor, which have arrived on the scene in the last five years. They are brewed to have all the intense hop character of a double IPA but with only half the alcohol (less than 5 percent)— so you can “session” these throughout the day without getting too sloshed. Many are poorly made and rightly written off by beer cognoscenti as “hop water,” but the style has nonetheless become extremely popular, especially among day-drinkers and the outdoors set. The best ones are robust and structured, with tropical fruit aromas and a clean but assertive finish.

San Diego’s Ballast Point Brewing & Spirits popularized this style in 2014 when it added grapefruit to the flagship Sculpin IPA to boost the grapefruity notes native to West Coast hops. Those flavors originate from essential oils in the hops which makes the beer burst with citrus and tropical fruit aromas. Now the citrus trick is ubiquitous, and everyone from Samuel Adams to the tiniest nanobreweries is on board. The results? A totally mixed bag. When done right the citrus elevates the beer, seamlessly melding with and accentuating the hops’ fruity aromas. When done poorly, the beer can feel gritty and taste artificial, like an IPA spiked with Tang.

Like citrus, Brettanomyces is a white-hot buzzword in craft beer. Called brett for short, it’s a category of semi-wild yeasts closely related to the domesticated yeasts that brewers have used for centuries. For most of beer’s history, a touch of brett in a beer was seen as a taint or defect; only lambic, gueuze, and some saison brewers actually welcomed the earthy, animal-like flavors it produces in their brews.

Most IPAs are much better without brett’s funky influence, but some are improved by the structure and complex aromas not present in “clean” beers. Brett IPAs are some of the few versions that can actually improve with age. Note that brett doesn’t make beer “sour” per se (that’s the work of bacteria like Lactobacillus and Pediococcus, which are often used in conjunction with brett).

Fresh or wet hop IPAs are brewed each fall on the heels of hop harvest. The hops are plucked from the fields and thrown immediately—fresh, green, and whole—into the beer, with no time to dry out. The process captures ephemeral oils and resins that begin to fade promptly after the hop cone is pulled from the plant. Think of the difference between using fresh herbs in a dish and dried ones, though not in terms of better and worse: fresh oregano has one flavor, dried oregano has another.

Freshly hopped beers are bright and good for just a few weeks, after which the fresh hop aromas and flavors have all but faded. Because of their fleeting nature, their distribution and production is extremely narrow.

IPLs aren’t technically IPAs—they’re lagers, or bottom-fermented beers rather than top-fermented ales—but they share so many characteristics with the style that it’s hard not to include them here. IPLs are clean and crisp with fewer esters and yeast aromas than IPAs, therefore arguably presenting a clearer hop character than IPAs. But some critics argue that they’re nothing more than a further example of American hopification of nearly every beer style.