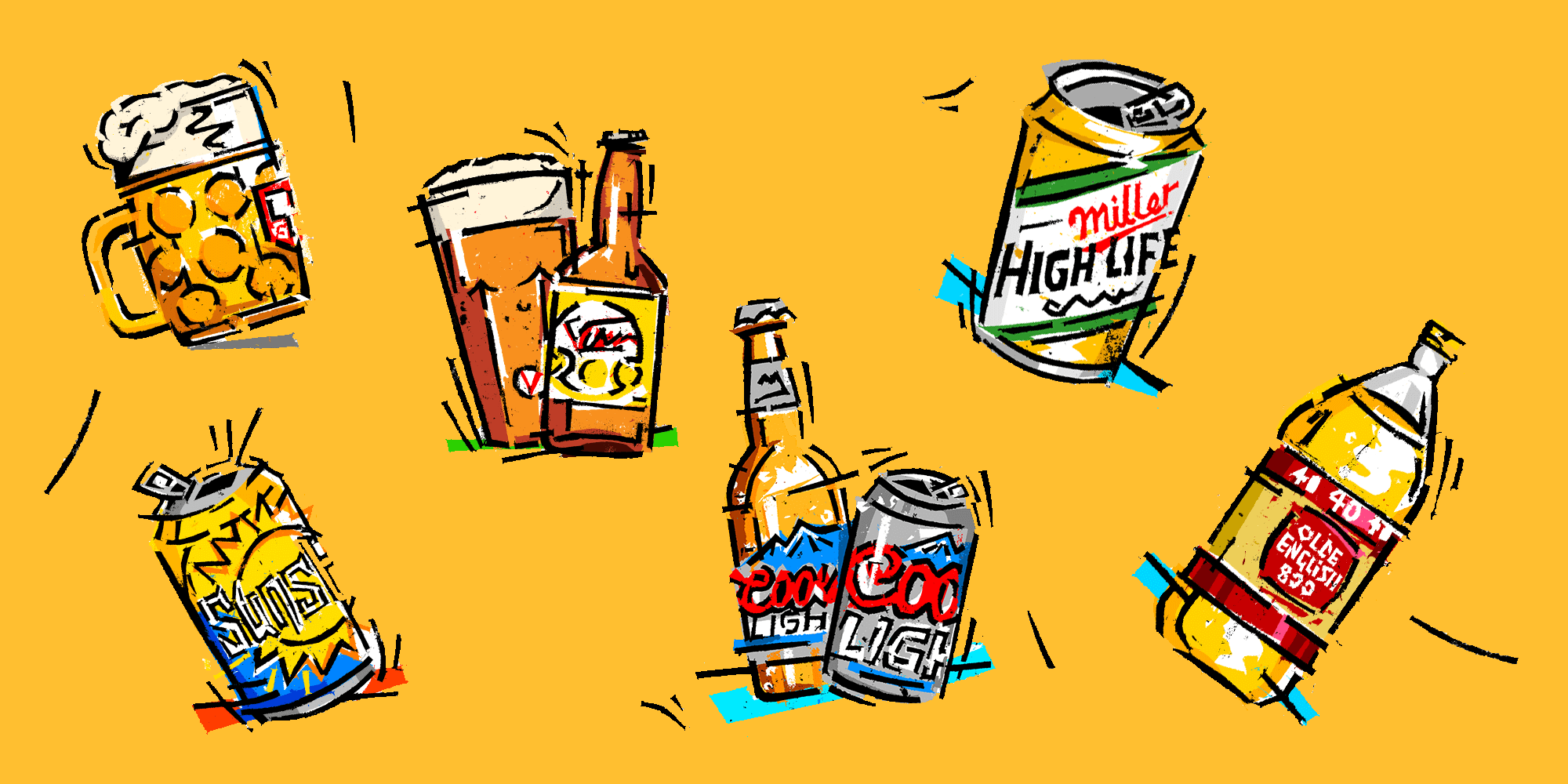 What you need to know.

Ales have been around for centuries (if not millennia), while lagers are the relative upstarts of the beer world—even though more than 90 percent of all beer produced on the planet today is lager. Their popularity and subsequent meteoric rise began in Central Europe in the mid-nineteenth century and is tightly correlated with the invention of refrigeration and cold transport.

Lagers include styles like pilsners and bocks and are fermented at cool temperatures, around 48 to 58 degrees Fahrenheit, by yeasts that work at the bottom of the tank. After a lager’s primary fermentation is complete, it undergoes a prolonged cold-temperature secondary conditioning—“lager” comes from lagern, the German word for storing—which results in a clean, crisp flavor.

Here’s a guide to the myriad styles and assortments of cold-fermented beers.

Most people think of pilsner and lager as synonymous terms, but in fact that’s far from true. Pilsner, first of all, isn’t German. It’s a certain type of pale, crisp lager that actually originated in the Bohemian town of Plzeň. Sure, the Czechs stole much of their inspiration from Bavarian lagers, which at the time were considered the finest beers in the world. And they even nicked a Bavarian brewer, Josef Groll, to create the recipe. But the pilsner style was the result of a concerted effort by the citizens of Plzeň to craft a high quality beer of their own after decades of drinking poorly made local beer. In 1842, the Bürger Brauerei, or Citizens’ Brewery, opened in Plzeň producing the world’s very first pilsner—a golden pale lager with a fluffy white head and a dry, crisp taste. The ingredients included sweet Moravian barley, spicy and aromatic local Saaz hops, and the soft, gently filtered water from the Plzeň aquifer. In 1898, the brewery trademarked the phrase “the original pilsner” which translates to Pilsner Urquell, and the rest is history.

So the Czechs invented pilsner, but was it really that distinctive from the pale Bavarian lagers being made just across the border? In any case, by the 1870s the name “pilsner” was so popular in Germany that many Bavarian breweries began marketing their traditional pale lagers as pilsners (or pilseners, or just pils—the names are synonymous). By the early twentieth century the term had become generic enough that the German Supreme Court allowed breweries like Bitburger and Radeberger to use it freely without legal consequences, but by the 1970s German pilsner had diverged enough from the original to warrant its own style. Then as now, German pilsners are crisper and more heavily bittered than the Czech originals, owing to the use of German bittering hops rather than the aromatic Saaz hops from their neighbors. German brewers also prolong the step known as a diacetyl rest, a brewing technique that removes much of the buttery aromas present in Czech pils. Most of the beer now sold in both Germany and the Czech Republic is labeled pilsner.

This is what most of us think of when we think of beer—pale, light in flavor, and served ice cold. It’s refreshing and bland with just enough booze to keep things interesting. The style was imported to North America in the mid-nineteenth century by German immigrants, most famously Adolphus Busch, who went to work with his father-in-law, Eberhard Anheuser, who founded a brewery in St. Louis in 1852. The style that Busch helped develop stands apart from its German or Eastern European predecessors: they’re less bitter and more gently hopped, and they often incorporate adjunct grains like corn and rice, which add a pronounced sweetness and lighter body.

This amber-hued lager originated from Austria, but today it’s very rarely made there. Instead, it’s the default beer style of Mexico—where lagers like Negra Modelo, Dos Equis, and Victoria dominate. (It’s unclear exactly why this style is so ubiquitous in Mexico; it may have something to do with Austria’s Ferdinand Maximilian Joseph, who ruled as emperor of Mexico from 1864 until 1867.) Vienna Lagers were first introduced in Austria in 1841, developed in close consultation with the creator of Germany’s Märzen beer, which also debuted that year. It’s reddish in color, moderately bitter, and mild, usually clocking in at around 5 percent ABV. Because of the specialty air-dried malt that’s used, it often shows toffee and bready flavors.

Märzenbier means “March beer” in German. It’s a Bavarian beer that gets its name from a sixteenth century decree which forbade the brewing of beer during warm months, when the liquid was susceptible to bacterial infection and spoilage. As a result, the beer brewed in March was typically made stronger than usual, around 6 percent ABV, and kept in cool lager caves which slowly conditioned the beer all summer long. The first beer to be called a “Märzen” was released at the 1841 Oktoberfest by Munich’s Spaten Brewery, and the style—made with a distinctive dark amber malt—has become synonymous with the annual festival ever since. In Germany only six breweries can label their beer Oktoberfest: Spaten, Paulaner, Hofbräuhaus, Löwenbräu, Hacker-Pschorr, and Augustiner. All other breweries must use the term Märzen. In the U.S., however, the term Oktoberfest is far more common.

Bock is a general term for a family of beer styles originating from Einbeck, Germany. The style is typically malty, dark, and strong with an ABV above 6 percent (though there are exceptions). Maibock, for instance, is pale and hoppy and meant for drinking in quantity during the springtime, with a corresponding ABV of 6 percent. Doppelbocks are dark and sweet, with notes of caramel and plum and an ABV between 7 and 10 percent. Booziest of all are eisbocks (many above 12 percent ABV), made by freezing a portion of the base beer (usually a doppelbock) and removing the ice, concentrating both the flavor and the alcohol.

Like Bock, dunkel is a broad category: the term simply means “dark” and often refers to whatever dark lager a brewery makes or bar has on draft. The most famous, however, come from Munich and Franconia. Munich dunkels were the original Bavarian village beers; they’re dark, malty, and low in alcohol. Franconian Dunkels, meanwhile, are slightly higher in ABV, with a surprisingly thin mouthfeel.

These black (schwarz) lagers look bold and bitter but are deceptively refreshing and crisp. They’re often toasty with a mild burnt aftertaste and a lighter body and drier finish than most dunkels and bocks. The dark malts used impart a mild bitterness and an acidic, chocolatey flavor. The style was popularized by the Köstritzer Brewery in the central German state of Thuringia which has been making schwarzbier since the sixteenth century.

Rauchbier may refer to any beer brewed with smoked (rauch) malt, but it’s typically a German lager. The style is popular in and around Bamberg, with Aecht Schlenkerla Rauchbier from Heller-Bräu Trum being the epitome of the style. The tale of rauchbier is a tall one—the story goes that an ancient monastery caught fire and most of it burned to the ground. But a small section that housed the brewery survived along with most of the malt. When the malt was used, it took on the quality of the smoke from the fire and thus rauchbier was born. A more common-sense origin theory would maintain that nearly all malt was once smoked (before modern techniques of barley malting emerged), and that modern rauchbier is just a holdover from the ancient style.

Light beers are low-calorie, low-carb variants typically formulated from a “heavy” parent beer (e.g., Budweiser–Bud Light, Coors–Coors Light, etc.). Some light beers are simply diluted with water while others use natural enzymes present in the barley mash to reduce the amount of fermentable sugars, thereby creating a low-alcohol (and low-calorie/carb) beer.

Though they’re not an official codified style, hoppy pilsners have become increasingly popular among American craft brewers and consumers. The style is different from India Pale Lagers, as it’s brewed like a traditional pilsner, not an IPA. Hoppy pilsners often incorporate European hops, and many are released as summer seasonals, often in cans.

Malt liquor contains no liquor at all. It’s actually a strong lager brewed with malted barley and fortified with extra fermentable carbohydrates like corn and sugar which boost its ABV into “high gravity” territory. Most clock in at 7–9 percent alcohol, are straw colored, and taste slightly sweet with a rich, almost cloying mouthfeel. They’re almost always sold in single forty-ounce bottles. The first American malt liquor was probably Clix Malt Liquor from Michigan, which dates back to the late 1930s. The style took off in the 1950s with Country Club Malt Liquor and was universalized in the 1980s and 90s by rappers like N.W.A. and Tupac.

These ultra-light lagers are similar to American lagers like Budweiser and Coors, but are adjuncted exclusively with rice rather than corn. They’re highly effervescent with a dry, crisp finish and an unobtrusive, almost insipid flavor.

This term refers to any carbonated alcoholic beverage made in Japan with less than two-thirds malt content, meaning that most of the fermentable sugars come from adjuncts like soy, potatoes, rice, and corn. That low malt content means it’s taxed at a lower rate than beer in Japan, making it a cheaper alternative.