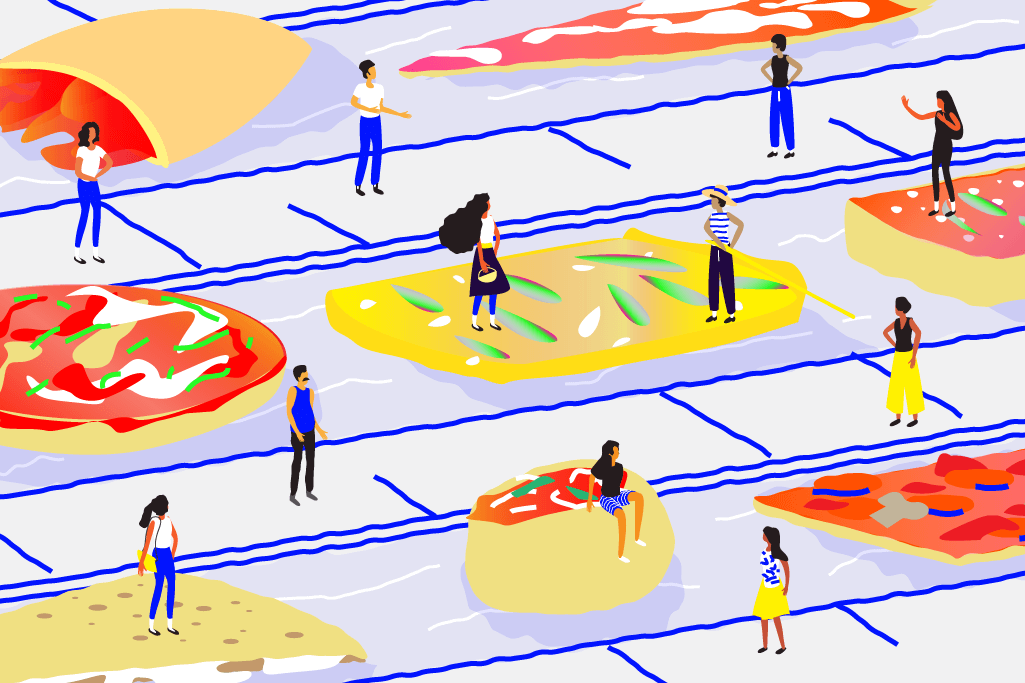 Pizza Napoletana and 10 other reasons to go to Italy.

Italy is, undeniably, the birthplace of pizza. But, when travelling through the country, pizza lovers might be confused by how they’ll find the same style of pizza over and over again: thin, almost soupy in the middle, charred thick crust, tomato sauce, and fresh mozzarella. That’s pizza Napoletana, the legally protected style that originated in Naples around the early nineteenth century. Pizza Napoletana is what Italian immigrants brought to New York City at the beginning of the twentieth century, and the launching point for at least a dozen distinct styles in America, not to mention global behemoths Pizza Hut and Domino’s, and innovations such as pretzel pizza, hot dog pizza, and Hot Pockets.

Pizza Napoletana is the classic pizza that Italians are excited to show off, and rightfully so. But look beyond the touristy pizzerias and check out the local bakeries and street vendors instead to find regional specialties, some of which most likely predate the Napoletana. From the fluffy sfincione to the many-layered scaccia, Italians have a lot more pizza goodness to share—you just need to know where to look.

There are far too many ways that Italians make pizza for this list to contain every single variety. As with our guide to the regional Pizzas of America, tough cuts had to be made (sorry, schiacciata, pizza di sfrigole, and pizza bianca). The pizzas below are iconic: they have traceable origins to particular regions, are distinctly different from other types of pizza, and can easily be found at multiple locations. And they lean more toward pizza than cheesy bread: toppings are key.

AKA: Neapolitan, pizza Napoli
Origin: Naples
Where to get it: Pizzeria Starita, Naples

A true Neapolitan pizza has very strict standards as articulated by the Associazione Verace Pizza Napoletana: the dough must be made with at least 80 percent highly refined type 00 (doppio zero) flour and up to 20 percent type 0 flour. Once the dough (only flour, water, sea salt, and brewer’s or natural yeast) is formed, it rises once for two hours, then is formed by hand into little balls (panetti) weighing 180–250 grams and left to rise again, this time for four to six hours. The fermented dough balls are then hand-formed into dischi di pasta. Working from the center out, the pizzaiolo flattens the dough ball into a round with a thin middle (0.4 cm) and thicker border or cornicione (1–2 cm). It’s baked in a wood-fired oven for 60–90 seconds at 485°C (905°F). The finished product has a chewy crust, patches of mozzarella, tart tomato sauce, and a drizzle of olive oil. Only two varieties of toppings are allowed: marinara (San Marzano tomato, extra-virgin olive oil, oregano, and garlic) and margherita (tomato, oil, mozzarella di bufala DOP or fior di latte, grated hard cheese, and fresh basil). Whole pizzas are eaten with a knife and fork, or folded in quarters. Here’s the confusing part: in addition to being a regionally protected pizza style, Napoletana is also a combination of toppings (tomato, mozzarella, and anchovies) found throughout Italy. So don’t be surprised to find tiny fish on your pizza if you order Napoletana from a pizzeria that isn’t AVPN–approved.

Roman pizza is baked in rectangular sheet pans in an electric oven and sold by weight, cut to order with scissors. Toppings range from bianca (no sauce, just olive oil and cheese) to mushrooms, gorgonzola, stracchino, and sausage (a favorite at La Boccaccia). Al taglio (“by the slice”) portions allow for casual snacking or full-on dinner. “It’s all on display. You choose and you buy. There’s no menu,” says Pizzarium chef Gabriele Bonci. Despite its rectangular shape, pizza al taglio is not a focaccia. “The pizza is flattened on the pan, dressed, and cooked,” Bonci explains, “A focaccia proofs while in the sheet pan.”

AKA: sfinciuni, Sicilian
Origin: Palermo
Where to get it: Panificio Graziano, Palermo

Unlike its thin-crusted friends in Naples and Rome, Sicilian sfincione is proudly fluffy: sfincione is loosely translated as “sponge.” What separates this rectangular bread from focaccia is the addition of toppings before baking: tomato, onion, anchovy, sheep’s milk cheeses like caciocavallo, breadcrumbs. Sicilian pizza purists don’t consider sfincione pizza, but as the first square-squishy-bread-with-toppings, its influence on pizza-eaters of the world is undeniable. Chicago deep dish, Philly tomato pie, and, of course, American Sicilian all owe their existence to sfincione. One style of Sicilian pizza, sfincioni di San Vito, features a meat and ricotta filling between two layers of pizza dough, and might be the precursor to Chicago’s stuffed pizza.

Considered by some to be the first pizza, this northwestern Italian specialty is known as pissaladière in nearby Provence, where it takes its name from the anchovy paste called pissalat (“salt fish”), because of the anchovies it’s topped with. Sardenara is baked in large iron trays and topped with the namesake oily fish and garlic. Caramelized onions, olives, and herbs are also traditional, but tomatoes are not, though many Italian preparations now feature the red fruit. In France, the anchovies are generally arranged in a diamond pattern. This style of Italian-French pizza inspired Alice Waters to start her wood-fired California pizza program.

Origin: Naples
Where to get it: Pizzaria La Notizia, Naples

A calzone consists of a circle of pizza Napoletana dough topped on one side and then folded into a stuffed half-moon. In Naples, traditional toppings include ricotta, mozzarella, and salami, prosciutto, or ham. Deep-fried calzones are popular in Puglia and Milan, meaning that Americans surprisingly did not invent deep-fried pizza.

AKA: pizza al tegamino
Origin: Turin
Where to get it: Il Padellino, Turin; Pizzeria Dessì, Turin

Literally “pizza in a pan,” pizza al padellino is a specialty of Turin. These individual-sized pizzas are cooked and served in small round pans and resemble a restrained version of Chicago’s deep dish. The dough gets an extra rise in the pan, making it softer and more digestible, and ends up with a slightly fried crust from baking in the oily pan: “fritta, ma non troppo,” (fried, but not too much) says one Italian blogger.

AKA: pizzòlu, pizzolo Siciliano
Origin: Sortino
Where to get it: Pizzeria Trattoria Le Monache, Sortino

This specialty of Sortino, a tiny Sicilian town in the Anapo river valley near the Necropolis of Pantalica, has a lot in common with Italy’s other stuffed pizzas, but the way it’s made is entirely unique. The round dough is partially baked, then sliced into two layers and filled with toppings—prosciutto, mozzarella, tomatoes, greens, and sausage are all options—before being put back together. The top is brushed with olive oil, oregano and/or thyme, and grated parmesan before going back into the oven. A dessert variety features pistachios, cottage cheese, and local honey. Ask for your pizzolo doppia farcitura if you want to try half with one kind of filling, half with another.

One of the least pizza-looking pizzas in Italy, scaccia consists of thinly rolled dough spread with toppings and then folded up on itself to resemble a strudel. The long, rectangular pizzas are then sliced, revealing the layers of crust, sauce, and cheese. A specialty of the Ragusa province in Sicily, there are regional differences even between cities: in the capital, saccia features simply tomato sauce and cheese, while in Solarino, vegetables, potatoes, and sausage make an appearance. In the foothills you’re more likely to find cottage cheese and sausage between the layers of your scaccia.

These tiny deep-fried pizzas are the closest thing you’ll find to the pies Alexandre Dumas observed the lazzarone (Naples’s poorest class) snacking on in in the 1830s. At the opposite end of the spectrum from the highly regulated pizza Napoletana, these mini-pies are typically sold by street vendors in alleyways. They’re brushed with tomato sauce and topped with a dollop of fresh mozzarella and sometimes a single basil leaf. Some say pizzelles were made by pizzaiolos’ wives with leftover dough, but nowadays they’re often made with a softer, yeastier dough—like a pizza doughnut.

AKA: ripieno fritto, calzone fritto, calzuneddi
Origin: Puglia
Where to get it: Luini Panzerotti, Milan

This little pizza pocket, which differs from a calzone in both size and method of cooking (it’s deep-fried, not baked), is believed to have originated in Puglia, where it is served to mark the beginning of Carnival. It found a major following, however, in Milan, when Giuseppina Luini moved up north in 1949 and brought her panzerotto recipe with her. The classic filling is tomato sauce and fresh mozzarella, but many variations exist.

AKA: focaccia di Recco
Origin: Recco
Where to get it: Focaccia In Piazzetta, Recco

Focaccia di Recco is a regional specialty of the Ligurian town of Recco. Less like the thick, spongy foccacias of, say, Sicily, and more like an Italian quesadilla, focaccia di Recco (which has an EU Protected Geographical Indication) features crescenza between two ultrathin layers of a typically yeastless dough. When focaccia di Recco is spread with tomato sauce, olives, anchovies, or other toppings, it becomes pizzata focaccia di Recco, or pizzata di Recco, a pizza with a secret cheesy base.