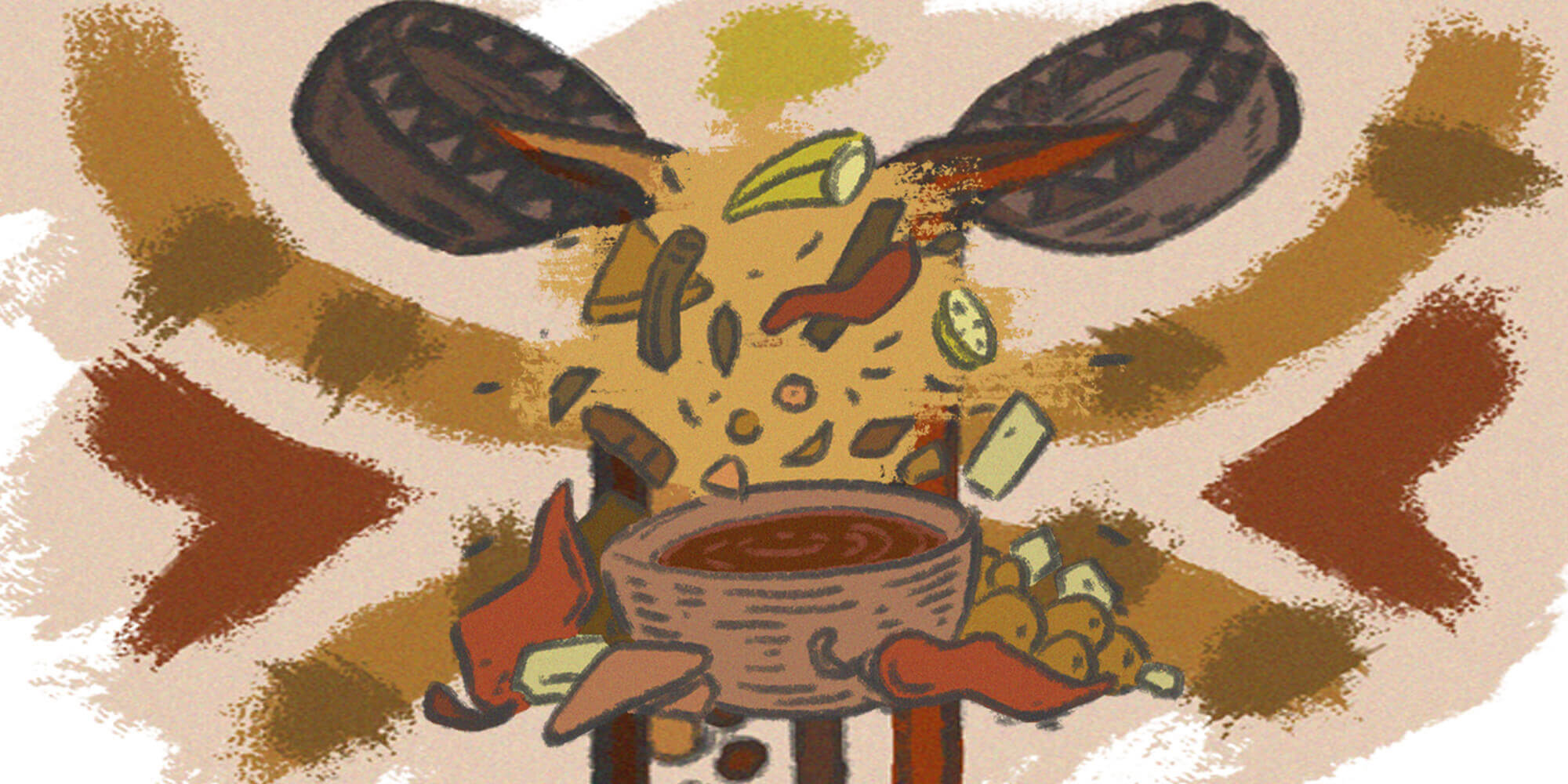 Mole is not one dish—the term encompasses a range of flavors, textures, consistencies, and ingredients, a heterogeneous spectrum that unrolls like a table-covering treasure map.

The word “mole” comes from the Nahuatl “mulli,” meaning sauce or stew. Though the word is pre-Hispanic, the moles that we know today are the result of centuries of marrying and modifying regional ingredients and new and old techniques. Most start with a paste made from dried chilies, nuts, seeds, and spices, and are thickened with a starch—masa, tortillas, or bread. The results are eaten alone with tortillas or as a vehicle or sauce for proteins.

The basic rubrics one can use to categorize moles overlap like Venn diagrams. There are moles that are named for the region they come from; for the color of their sauce; from the ingredients the contain, like cacahuates (peanuts) or pipián (ground pumpkin seeds); or for the ingredients they cover, as in mole de iguana or mole de hongos (mushrooms). Even guacamole, the ubiquitous, mashed avocado dip, is connected to the original meaning of the word.

Mole recipes change from state to state, region to region, household to household, and even down to each individual cook. Here is our attempt at a typology.

The Seven Moles of Oaxaca

Oaxaca, Puebla, and Tlaxcala all claim propriety of the original mole, but the true origins have been lost to history. However, Oaxaca is the region most often associated with mole, and it harbors the most variety. People call it the “land of seven moles”—the seven listed here—which is a commonly used (albeit incorrect) phrase; there are certainly many more.

Usually reserved for special occasions, mole negro is the most complex member of the mole family. It is known for its inclusion of chocolate, but its distinctive ebony shade comes from a deep, careful charring of the ingredients. The base recipe is made of pasilla, mulato, ancho, and guajillo chiles, tablets of Mexican chocolate, cumin, clove, cinnamon, thyme, marjoram, oregano, fresh or dried avocado leaves (which lend an anise-y flavor), onion, garlic, and tomato. It is thickened with tortillas and/or sweet bread. It may also include ground nuts, like peanuts and almonds; seeds, like sesame or pumpkin seeds; or plantains. It is moderately spicy, with a pleasant bitterness balanced with gentle sweetness.

Mole coloradito’s name—which means “reddish” or “a little red”—refers to its hue. Its base of chilcostle, guajillo, and ancho chilies lends a moderate-to-robust heat, with tomato, garlic, cinnamon, clove, cumin, oregano, bay leaf, and sesame rounding out the team. Bread, chocolate, and nuts are all unusual but acceptable additions to the mix.

Traditionally served with: cubes of potato with chicken or pork
Found in: Oaxaca

Mole colorado, or mole rojo, is a red mole with a base of ancho, costeño rojo, chilhuacle rojo, black pepper, clove, oregano, onion, garlic, ground almonds, sesame, and chocolate. It is usually thickened with a bit of masa. Colorado is the spiciest of the seven Oaxacan moles, with a long, lingering prickle. It is generally served during special occasions.

Traditionally served with: pork, chicken, turkey, slabs of mild white cheese, or beans, with rice on the side
Found in: Oaxaca, Morelos, Jalisco

Mole verde, sometimes referred to as pipián verde, is a verdant mole turned green with seeds (ground squash seeds, pepitas, sesame seeds), aromatic herbs (cilantro, parsley, epazote, hierba santa), chilies, and tomatillos. The sauce can be smooth or have a slightly granular texture, with an herbaceous, nutty flavor. It may be thickened with masa and can also include Swiss chard, lettuce, and sorrel.

Mole amarillo is a group of various yellow-toned moles made from costeño amarillo, chilhuacle amarillo, and guajillo chiles pulverized with tomato, tomatillo, onion, and garlic. The herbs and spices can include cloves, black pepper, oregano, hoja santa, avocado leaves, and achiote. It is a savory mole and is looser than others, with barely any sweetness. You’ll usually find it served with chicken or pork, with the addition of potatoes, carrots, string beans, chayotes, and/or chochoyotes (masa balls). Note that when the protein is pork, the sauce is seasoned with hoja santa; with chicken, it’s cilantro; with beef and iguana, it’s pitiona, an herb that tastes like lemon verbena. Rabbit, armadillo, turtle, shrimp, and eggs are less frequent protein choices.

Traditionally served with: chicken, pork, or beef, or iguana
Found in: Oaxaca

Mole chichilo is the least common of the seven Oaxacan moles. It’s a dark sauce, thinner than most moles, made from ground chilhuacle negro, mulato, and pasilla chilies mixed with burnt tortillas and beef stock, and seasoned with avocado leaves, tomato, garlic, clove, black pepper, and cumin.

This lurid, scarlet-colored mole is a threat to any tablecloth it is served on or any light-colored clothing within splashing distance. It is sweetly spiced, essentially a mole rojo prepared with ancho and guajillo chilies, cumin, clove, black pepper, ground nuts, cinnamon, thyme, oregano, garlic, and onion. The mole is typically cooked with lots of fat, usually lard, so that it coruscates with oil. There are often pieces of fruit—pineapple, plantain, apple, or sweet potato—in the mix.

Mole blanco or mole de novia: Mole blanco is not considered one of the seven moles of Oaxaca, but it’s a unique one nonetheless. Pale nuts like almonds, peanuts, and pine nuts are ground into a luxurious white sauce along with sesame seeds, garlic, onions, and a few yellow or orange chilies. Mole blanco is rich and nutty, with just a shiver of heat. Note: Veracruz also has a mole de novia, sometimes called a mole de xico, but it is jet black.

From Taxco, Guerrero, mole rosa is a mole made from the famous pink pine nuts of the region, blended with almonds, sesame seeds, cinnamon, chipotles, hoja santa, onion, garlic, anise, and a splash of mezcal or pulque. Pink pine nuts are considered a luxury ingredient, so some cooks cut the mole with a bit of cooked beet. It is sweetish and supple like a white mole, but slightly spicier.

Traditionally served with: chicken or quail
Found in: Guerrero

Legend has it that mole poblano was conjured by nuns at the Convent of Santa Rosa in Puebla during Mexico’s early colonial period. When the convent got word that the archbishop was visiting, the nuns scrambled to assemble something grand with their meager supplies. They ended up killing an old turkey and covering it in a sauce made from bits of disparate ingredients—and it was a hit. Most mole poblanos contain dried chilies like ancho, pasilla, chipotle meco, and mulato; spices like clove, black pepper, cinnamon, and anise; alliums like garlic and onion; and other flavorings like tomato, raisins, plantains, almonds, piloncillo, and meat broth. The result is silky, dark brown, and rich; the heat is defanged by the honeyed sweetness of dried fruit.

Mole prieto is a spinoff of mole negro with distinct ingredients and/or techniques that vary from town to town. In Tetla, Tlaxcala, mole prieto refers to a dark, almost-black mole made with dried huitlacoche, served over pork or chicken. In another township, Santa Ana Chiautempan, mole prieto is a special, celebratory mole that is made communally in enormous cauldrons in the center of town by bands of cooks over the course of many days, culminating in a special festival.

“Mole ranchero” is a catchall term often applied to lesser-known regional moles outside of their home regions. Mole Huasteca is from the Huasteca region and is served during celebrations and festivals; Mole Tehuipango, which sometimes includes ground animal crackers as a thickener, is from Tehuipango in Veracruz; mole de Tonatico, in the Estado de Mexico, is always served with a bean tamale.

Traditionally served with: chicken, turkey, beef, pork, or regionally specific proteins
Found in: Most central and southern states of Mexico

Mole de garbanzo is a celebratory mole made in Juchitán, Oaxaca, often served with eggs, that is flavored and thickened with toasted, ground garbanzos (chickpeas). Mole de frijol uses beans, either cooked and mashed or toasted and ground into a flour, as the base of a simple mole that also includes chipotle, cinnamon, onion, and clove, and often incorporates the bean-cooking liquid into the finished product.

MOLE DE WHATEVER YOU COVER WITH MOLE

Many moles are named not for the style of the sauce but for the ingredient they cover. For example: mole de iguana, mole de venado (deer), pancita en mole (tripe), moles de hongos (wild mushrooms collected during the rainy season), pescado en mole (fish), and mole de quelites (wild greens).

Found in: Various central and southern states of Mexico

These dishes are various stews and salsas made with guaje seeds: bright green seeds that run through flat, papery pods, and taste like garlicky, green pumpkin seeds. To make these dishes, the beans are extracted from their pods; pounded with garlic, salt, and chilies into a salsa; or cooked and served with pork, chicken, iguana, or beans.

The classic botana of avocado, mashed and mixed with onion, tomato, chiles, lime, and cilantro. The word comes from the Nahuatl ahuaca-mulli, from ahuacatl (avocado) and mulli, “mole” or salsa.

Found in: Almost all states of Mexico

More a soup than a sauce, mole de olla is a potage of mixed vegetables in a chili-spiked beef broth, usually pasilla and guajillo. Chochoyotes and veggies like corn, green beans, carrots, potatoes, and epazote are often cooked into the soup.