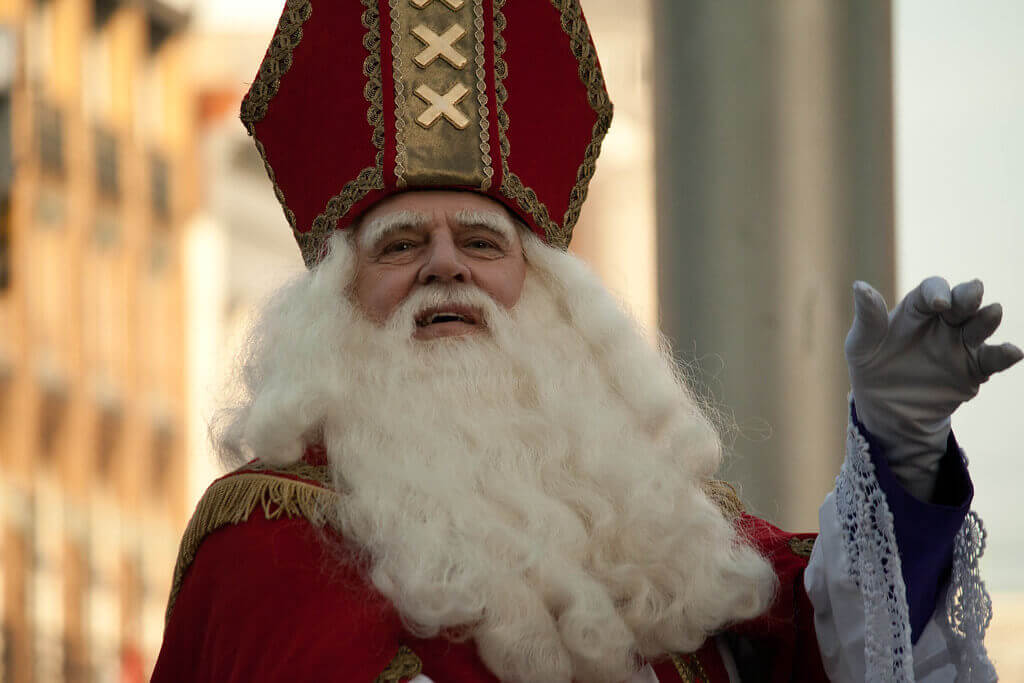 The many treats of a Dutch pre-Christmas celebration.

On the days leading up to Sinterklaas, which takes place on December 5, children across the Netherlands put their shoes in front of the fireplace, radiator, or door in the hopes that Saint Nicholas will fill them with the very particular cookies and treats of the holiday.

The basics of the holiday are: In mid-November Saint Nicholas arrives in Holland via steamboat and spends the days leading up to his birthday (December 6) deciding which children have been good or bad. On pakjesavond (the night of December 5), he rides his white horse through Holland, delivering little presents and treats in burlap sacks.

Bad children don’t get a lump of coal—they are hauled away to Spain (where Saint Nicholas lives during the rest of the year) by zwarte pieten, Saint Nicholas’s Moorish “helpers.” (The “black Peters” are often represented by Dutch people in blackface—today a practice hotly debated in Holland, and one that would probably spark riots in the United States. Of course, a football team called the Redskins still takes the field on Sundays here, so maybe not.)

Adults write funny poems about each other, and drink. Throughout all this merry-making, Dutch people eat a few very special Sinterklaas treats.

Only available during this time, chocolade letters are—you guessed it—chocolate initials. Hefty and made of high-quality chocolate such as Droste, they’re a favorite of Dutch children, who expect to find the chocolate-sculpted first letter of their name in their shoe.

Marzipan: you know what it is. But you might not know the best way to eat it, which is in a log, covered in dark chocolate. Colorful marzipan renditions of Sinterklaas or carrots (for Sinterklaas’s horse) are available, but if you’re looking for flavor, go for the gold foil-wrapped log, which tastes more of almonds than processed sugar and Red Dye No. 2.

The most important Dutch confection, speculaas is a crispy, spicy cookie available year-round in the Netherlands. Flavored with cardamom, nutmeg, cinnamon, cloves, and ginger, it’s eaten with particular fervor around Sinterklaas time. Made by pressing the spiced dough into intricate wooden molds, the cookies may have derived their name from speculum, the Latin word for mirror, because the cookies mirror the molds they’re formed in. Speculaas generally resemble houses or animals, but around this time its common to find them in the shape of Sinterklaas himself. Americans may be more familiar with speculaas as Biscoff, the in-flight cookies on Delta airlines, or the main ingredient in Trader Joe’s Cookie Butter.

Speculaas’s flavor is so distinct that it has transcended its status as mere cookie—you’ll find the same blend of warm winter spices in speculaas cakes; schuddebuikjes (tiny cookie pellets that resemble dry dog food); and, at Trader Joe’s, ice cream. Some Americans have even gone so far as to make Cookie Butter cookies.

Literally “filled speculaas”—almond paste is sandwiched between two layers of thin, speculaas-flavored cake and topped with toasted, slivered almonds to form the perfect synthesis of two of Sinterklaas’s most prevalent snacks: speculaas and marzipan.

I mention these together because they’re often confused. While both small, round cookies that Zwarte Piet throws to children during Sinterklaas, pepernoten (“pepper nuts”) are chewy anise-flavored cookies (see taai-taai), while kruidnoten (“spice nuts”) are the more common, crunchy, speculaas-flavored cookies.

Grown-up pepernoten. Dense and heavily flavored with anise, taai-taai aren’t the best-tasting snack at the Sinterklaas table, but their cute, squat Saint Nicholas shape makes them a must. Plus, they’re fun to say. Unlike speculaas, taai-taai aren’t eaten much during the rest of the year. Maybe it’s because chomping through these solid cookies kind of takes a toll on your jaw: “taai” translates to “tough.”

Little yellow and pink marshmallows, spekkies are eaten year-round, but especially in winter, when they can be found in the shape of Sinterklaas’s red and yellow miter. Softer and more pliable than Jet-Puffed, Dutch marshmallows should not be confused with spek, which is bacon.

Wash it all down with a glass of Chocomel, Holland’s favorite chocolate milk. Beloved by children everywhere and consumed in cute glass bottles or giant milk cartons, Chocomel’s slogan is “de enige echte,” the only real one. The pervasiveness of this smooth, intensely chocolate beverage is such that the brand name is essentially synonymous with the word chocolademelk.