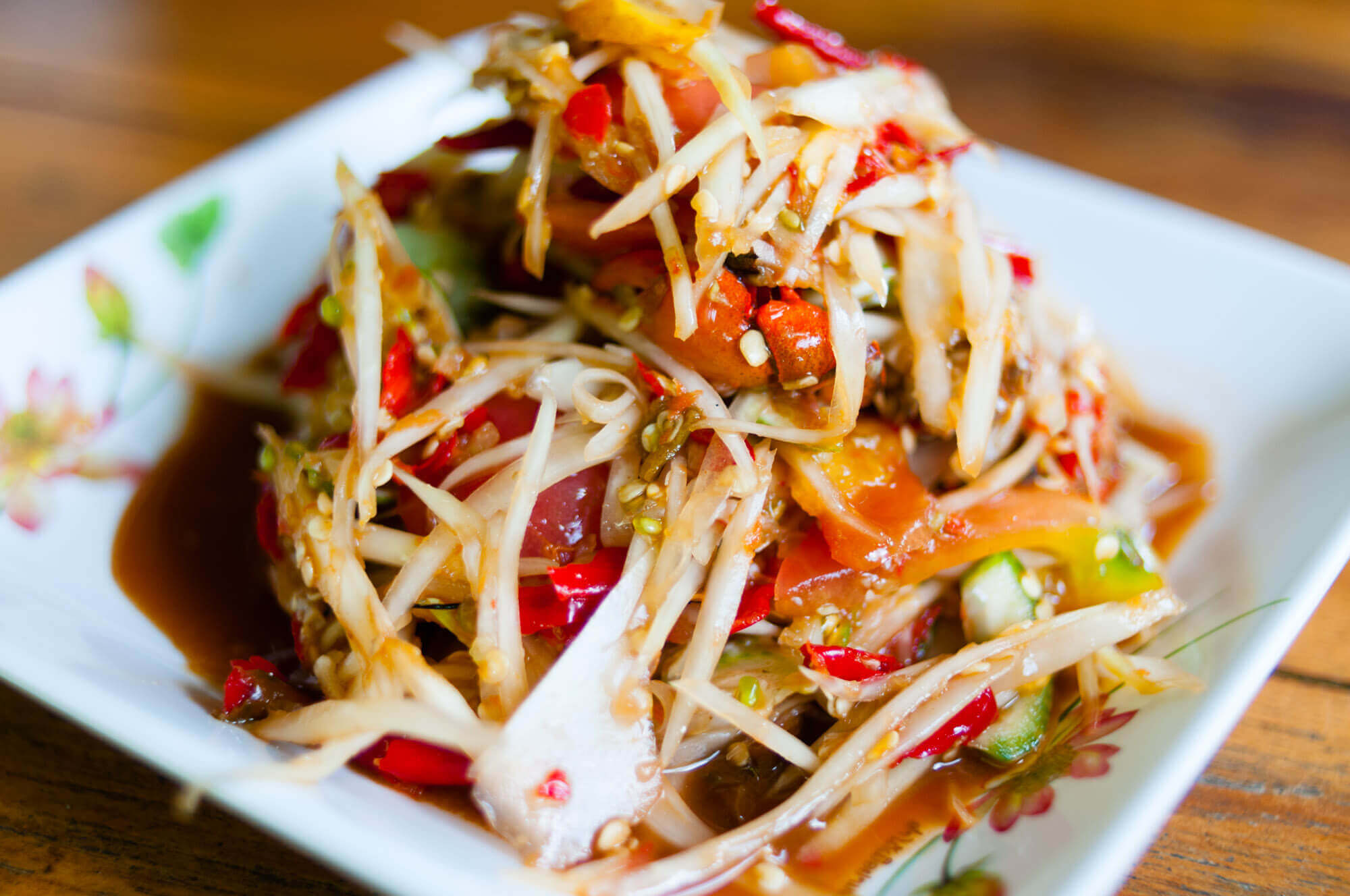 Let’s be clear from the start: there’s no such thing as “Thai food.” Thailand is home to a stunning amount of culinary diversity—a place where a villager outside of Chiang Mai, in the North, may not even recognize the dinner of his compatriot near the Malaysian border, in the South. These differences come as a result of an often-complex interaction of geography, wealth, and immigration, factors that have provided this California-sized country with an almost disproportionate spread of ingredients, dishes, influences, and, ultimately, cuisines.

If there’s any single element that can serve as a dividing line among Thailand’s regional cuisines, it’s rice. The wealthier and more urban central and southern parts of the country subsist upon long-grained rice, while the poorer, more rural northern and northeastern regions remain loyal to sticky, or glutinous, rice. Yet within this broad North-South rice divide, there are further distinctions, and it’s generally accepted that Thailand comprises four distinct regional cuisines.

With influences from Chinese and Muslim immigrants, as well as Bangkok’s royal court, the food of central Thailand, which includes Bangkok, is hands-down the most diverse—and sophisticated—of Thailand’s regional cuisines. Part of this is also due to the fertility of the central Thai plains, a region crisscrossed by rivers, which provides the people with fertile soil for planting rice and other crops, as well as freshwater fish. Central Thailand’s cuisine is also the country’s most well-traveled: the dishes you’re likely to encounter in a Thai restaurant abroad are often approximations of the rich curries and Chinese-influenced stir-fries that, for those both in and outside the country, have come to represent Thai food.


Important ingredients and seasonings: Coconut milk finds its way into a variety of curries. Palm sugar provides dishes with a sweet flavor. These days, pork is the preferred meat in central Thailand, but traditionally fish, both salt and freshwater, was the main protein, and it remains the source of Thailand’s most famous seasoning: fish sauce is made from anchovies caught in the Gulf of Thailand.

Cooking techniques: Curries, soups, chili-based dips, and salads, the latter known as yam, are common in central Thailand. Due to the strong Chinese influence, many central-Thai dishes are wok-fried.

Rice: People in central Thailand eat long-grained rice, except for in sweet snacks, for which sticky rice or sticky-rice flour is often used.

Essential dishes: Kaeng khiaw waan (green curry) combines coconut milk, a hint of sugar, and a mild yet complex curry paste in a way that exemplifies the balance of flavors that many central-Thai cooks strive for slightly more obscure—at least abroad—but perhaps even more beloved by central Thais is nam prik kapi, a dip of shrimp paste, fresh chilies, garlic, palm sugar, and lime juice pounded with a mortar and pestle and typically accompanied by deep-fried mackerel and steamed and fresh vegetables. Gai phat met mamuang himaphaan, chicken stir-fried with cashews and dried chili, might be the epitome of classic Chinese-Thai fusion, one as popular outside of Thailand as it is domestically

With a heavy hand for both chili and salt, the food of southern Thailand is likely the country’s most intense. It’s also one of Thailand’s more diverse regional cuisines, and in the cities of the South, you’ll find a variety of Chinese dishes, with a strong Muslim presence the farther south you go. Not surprisingly, given its access to the sea, seafood pops up in just about every meal. And the South’s wet climate means there’s a variety of vegetables and fruit that aren’t generally found elsewhere in the country.

Spice level: Southern Thai is arguably the country’s spiciest cuisine, its curries, dips, and stir-fries so loaded with chilies the heat might shock even a diner from Bangkok.

Important ingredients and seasonings: Seafood—both fresh and preserved—is found in just about every southern-Thai dish. In particular, kapi, a paste made from tiny shrimp or krill, is an ingredient typically made and consumed in the region. Coconut milk provides many southern curries with a rich flavor. Fresh turmeric gives many southern-Thai dishes an orange or yellow hue. Black peppercorns feature in a handful of southern-Thai curry pastes. And locals go crazy over pungent vegetables such as sataw, sometimes known in English as “stink bean,” and look niang, known in English as dogfruit.

Cooking techniques: Curries and soups rule in southern Thailand. Chili-based dips, known as nam prik, are ubiquitous, and as in central Thailand, there’s also a variety of wok-fried dishes.

Essential dishes: Possibly the most emblematic southern-Thai dish is kaeng tai pla, literally “fish-kidney curry,” an intensely spicy, salty curry that combines salted fish kidneys with chunks of grilled fish, perhaps supplemented with bamboo, pumpkin, or sweet potato. Another staple is khua kling, a stir-fry of minced meat and spicy curry paste. Southern Thais are fanatical about khanom jiin, thin rice noodles accompanied by your choice of a curry-like topping (including kaeng tai pla). And many southern-Thai meals are accompanied by a dish of nam prik kapi (the spicy dip made from shrimp paste) and a tray of assorted herbs and vegetables—the latter serving as a much-needed break from the heat.

If you’re aware of a regional Thai cuisine, it’s probably that of Thailand’s Northeast, also known as Isan. As Isan is among Thailand’s poorest regions, its people have migrated to various parts of the country—and abroad—bringing their cuisine with them. These dishes are arguably the country’s most rustic, a reflection of the rural, agricultural lifestyle of the people who live there and the flat plains where they live. This culminates in a cuisine of full-flavored—some might say pungent—dishes, relying upon simple ingredients. In the cities and villages that border the Mekong River, there’s a palpable Vietnamese influence.

Spice level: The food of Isan can be intensely—but if you ask the locals, satisfyingly—spicy, a quality Northeasterners describe as saep.

Important ingredients and seasonings: Without a doubt, the most emblematic northeastern-Thai ingredient is plaa raa, fermented freshwater fish. The seasoning makes its way into a number of dishes, providing them with a salty flavor and a pungent fragrance some liken to a ripe Camembert. Many northeastern dishes include earthy, often gathered items such as game, bamboo, and even insects. And although the region’s meat dishes have become its most famous, a home meal often revolves around vegetables or fish.

Cooking techniques: The people of Isan love to grill, and are also particularly fond of tam, salads pounded in a mortar and pestle. Another unique aspect of northeastern-Thai-style cooking is that many of the region’s meat dishes are consumed raw. Soups, salads, and chili-based dips round out the repertoire.

Rice: The dominant carb in northeastern Thailand is sticky rice: short, chubby grains of rice that are cooked by steaming rather than boiling in water. The grains are eaten by hand, rolled into a small ball and dipped in the various dishes.

Essential dishes: Som tam, a salad of strips of green papaya bruised in a mortar and pestle with seasonings, is undoubtedly northeastern Thailand’s flagship dish. The almost hand-in-glove accompaniment to papaya salad is kai yaang, grilled chicken, another Isan classic, typically made with scrawny yet flavorful free-range chickens, and accompanied by dipping sauces that can range from sweet to spicy. Another favorite is larb, the “salad” of minced meat, made tart by the addition of lime juice, spicy via the addition of fresh chilies, and fragrant from a unique combination of fresh herbs and toasted rice powder.

Probably the least known of Thailand’s regional cuisines is that of the country’s North. The region’s mountainous geography is seemingly manifest in its dishes, which are unabashedly hearty and rustic. The relatively temperate weather of the North means that its cuisine is more seasonal than elsewhere in Thailand, with a variety of ingredients and dishes available only during certain times of the year. The cuisine’s outside influences include the Shan, an ethnic group related to the Thais who largely live in Myanmar; as well as the Burmese; and, to a lesser extent, the region’s so-called “hill tribes,” mountain-dwelling groups, some of which have roots in southern China.

Important ingredients and seasonings: These days, northern Thais are big meat eaters, with a preference for beef and buffalo, meats generally not consumed elsewhere in Thailand. Perhaps the most emblematic northern-Thai ingredient is makhwaen, a dried spice related to Sichuan pepper that provides many of the region’s meat dishes with a strong fragrance and subtle numbing sensation. For heat, northern Thais tend to rely on prik num, long, slender typically green chilies that are often grilled before being included in dips or curry pastes. Some dishes are given a savory flavor and distinct fragrance via thua nao khaep, a Shan seasoning of soybeans that have been fermented, pressed into disks, and dried in the sun.

Cooking techniques: The northern part of what is today considered Thailand was the first region to be settled by the Thai people after they emigrated from southern China, and correspondingly, its cooking techniques remain the most conservative, comprised largely of soups, salads, chili-based dips, and grilled dishes. Another unique aspect of northern Thai-style cooking is that many of the region’s meat dishes are consumed raw.

Rice: As in northeastern Thailand, sticky rice reigns as the go-to carb.

Essential dishes: The most famous northern-Thai dish is undoubtedly khao soi, wheat-and-egg noodles in a fragrant and rich curry broth. But it’s a relatively recent addition to the northern repertoire, possibly introduced by Chinese traders. The local-style larb, which, unlike its spicy, tart counterpart in northeastern Thailand, gains much of its flavor from a variety of dried spices, including makhwaen. Perhaps the most ubiquitous northern-Thai dish is nam prik num, a dip of the eponymous chilies, as well as shallots and garlic, that have been grilled over coals and pounded to a spicy tangle with a mortar and pestle. It’s typically served with steamed and/or fresh vegetables and deep-fried pork rinds.