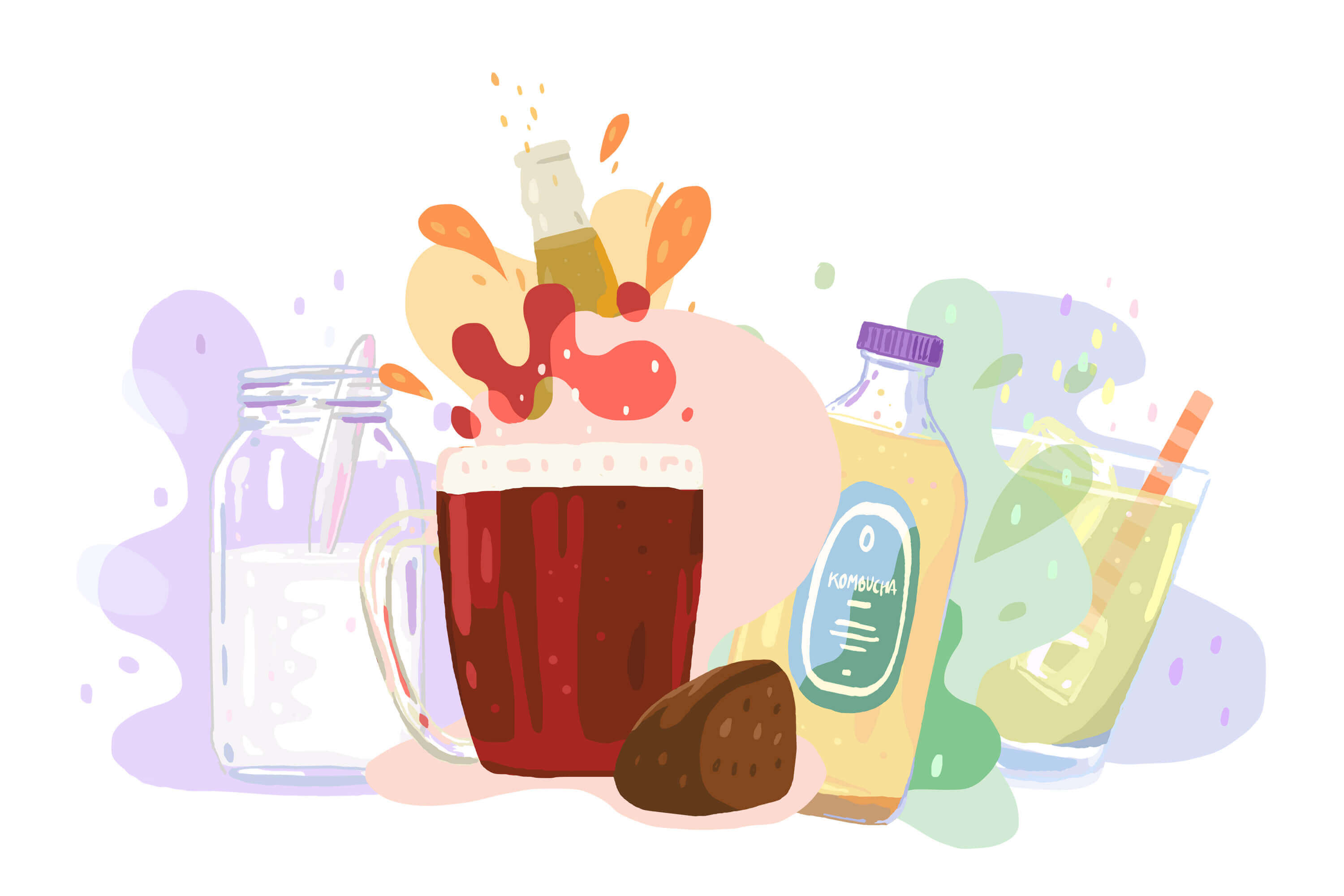 From kombucha to kvass, we weigh the newest health trend.

You know what they always say: A longer life means more time to be fabulous! Which is why the season’s hottest accessory isn’t a smartwatch or a pair of period undies; it’s a fermented beverage.

The health claims that you’ll find out there about fermented foods are as wide-ranging as the kombucha offerings at L.A.’s hottest grocery stores, but many scientists agree that eating (or drinking!) fermented stuff is good for what one doctor recently called “a healthy, balanced gut flora.” And really who doesn’t want a botanical garden of bacteria in their tummy!

Fermented drinks come in a range of forms: some are yogurt-like; some are fizzy and tangy; some are practically just vinegar. So really there’s something for everyone here—particularly everyone who likes drinking things that taste strange all in the name of health trends! Grab that disposable income of yours, head to the nearest health store, and buy a fermented bev or twenty! Here are all your options.

Gone are the days when store-bought kombucha had enough alcohol to get you buzzed. But now you can still get high on the multitude of flavor options and a near-religious devotion to this magical elixir! Kombucha is fizzy, lightly vinegar-y, and made from fermented tea; its persistent effervescence makes it taste like a liquid, raw-vegan version of Pop Rocks. No “solid” kombucha-related research has been done on humans, so most claims of its healthfulness are unfounded, but unpasteurized versions do contain probiotics, which are widely regarded as good for you.

Upside: So widespread that you can get it anywhere trendy-healthy things are sold, or at least purported to be sold, like your local bodega. Not the worst hangover cure. More flavors than Baskin-Robbins. Fizzy AF.

Downside: Is kombucha even trendy anymore? Is your mom drinking it? Are we living in a post-kombucha society? Why must we put up with wisps of the swamp monster-like “mother” at the bottom of our bottles?

You know how when you’re halfway through a container of yogurt, you’ll often pull it out from the fridge and see a vernal pool of almost-clear liquid sitting in the little craters left by yesterday’s spoon? That’s whey, and in the past few years it has gone from “weird liquid in your fridge” to “weird liquid bottled and marketed as something you should want to drink.” Shockingly, it tastes exactly like the yogurt liquid—which, hey, some people might like!

Upside: TANGY! If you happen to be drinking a honey-lime kefir tonic at your local independent bookstore and lament its awful flavor to the friendly people selling books to you, they might offer you free candy out of pity and solidarity. You can also rest assured that you’re minimizing waste, perfectly on trend, and possibly helping your own digestion thanks to all the “healthy bacteria” you’re pouring into your gut. Mixing it with tequila is not a bad idea, either.

Downside: Tastes like you tipped an unstirred, half-eaten tub of yogurt into your mouth and then swallowed the liquid, and also paid extra for it.

Kefir is like yogurt’s runnier, looser cousin, bedecked in crochet and feathers—the cousin that goes to Burning Man every year and ends any argument with marginally Buddhist platitudes. Like yogurt, it’s made by fermenting milk, but kefir carries a different type of bacteria (and, unlike yogurt, includes yeast). Its flavor is tangier, a bit sourer than the thick stuff. But you can still eat it like yogurt, especially if you soak some oats in there to thicken things up. Bring it to the office in a Mason jar and loudly tell everyone about your healthful new breakfast choice. Extra points if you add bee pollen!

Upside: Basically just tastes like drinkable yogurt! Extremely good smoothie ingredient! Lots of different flavors to choose from! Some even come in those little toddler-friendly pouches with cartoons on them if you’re into that kind of thing! Find the nearest tricycle and go for a ride!

Downside: A lot of people pronounce it wrong, so there’s a chance you’ll look like a fool when you’re trying to impress your cute barista by listing off all your favorite fermented bevies. It’s ka-FEER, not kee-fur.

A ginger bug—the basis of naturally carbonated ginger beer—is the sort of thing you might keep in your kitchen if you like the idea of maintaining a sourdough starter (nonsentient pets are soooooo cute) but you wouldn’t be caught dead with gluten in your house. While most ginger beverage products are just ginger-flavored sodas, some are made from this little bug that’s a combination of ginger and sugar water that traps naturally occurring yeasts the way a sourdough starter does. So it’s sort of alive, but not, you know, an actual insect. Fermented ginger beer, then, is usually a dilution of ginger bug, sometimes with added flavors or sweeteners.

Upside: Ginger is good for you and most people find it a pleasurable flavor to consume! This is probably the soda you can feel most virtuous drinking, and it will feel great explaining to everyone why you’re really feeding your body and soul with this beverage, not just gulping down sugary chemicals like commoners do.

Downside: It can be tricky to tell which ginger drinks are made with a ginger bug and which are really just sodas, so it’s kind of like Russian roulette. But hey, gambling is fun!

Want to feel super Russian—like, supermodel Russian—but don’t want to drink vodka or wear a fur coat or read a book over three hundred pages? Try kvass! It’s a lightly effervescent and lightly alcoholic drink made from fermented grains, often with a base of black bread or rye bread (though also sometimes made from beets, which are said to improve liver health). And it’s a popular summer drink among Russians looking for refreshment. (How do you say “ahhhhhh!” in Russian? No clue!) It’s also common in other Baltic and Slavic countries, where pickling and fermenting has served as a way to keep food safe to eat throughout the long, cold winters. Currently, you can find a few artisanal versions produced in hip American cities.

Upside: Old-world charm, worldliness, pairs well with a fur stole and a cigarette holder (but not an actual cigarette because those aren’t good for you, okay!). Dostoyevsky and Tolstoy both mentioned it in their writing so it’s also extremely literary; not just cultured but cultured.

Downside: You’re likely not getting the real deal—most commercial kvass isn’t “alive” like its homemade counterparts, since it’s pasteurized.

You haven’t fully committed to your healthy lifestyle if you haven’t drunk something that’s commonly used as a natural household cleanser—am I right, ladies? It’s kind of like taking a spin class: makes you want to die a little bit while it’s happening, but ultimately good for you! A 2006 study about the medicinal effects of vinegar wrote that consuming polyphenols—which are present in apple cider vinegar—can reduce your risk of cancer. And if you’re not down with pouring straight vinegar into your body, there are a range of vinegar drinks on the market—like switchel, a combination of cider vinegar, maple syrup, and water that’s simply begging to be drunk from a Mason jar. Very farmer-chic.

Upside: Unfiltered apple cider vinegar is easy to find at your local health store, not insanely expensive, and useful in other ways if you decide you can’t stomach drinking the stuff.