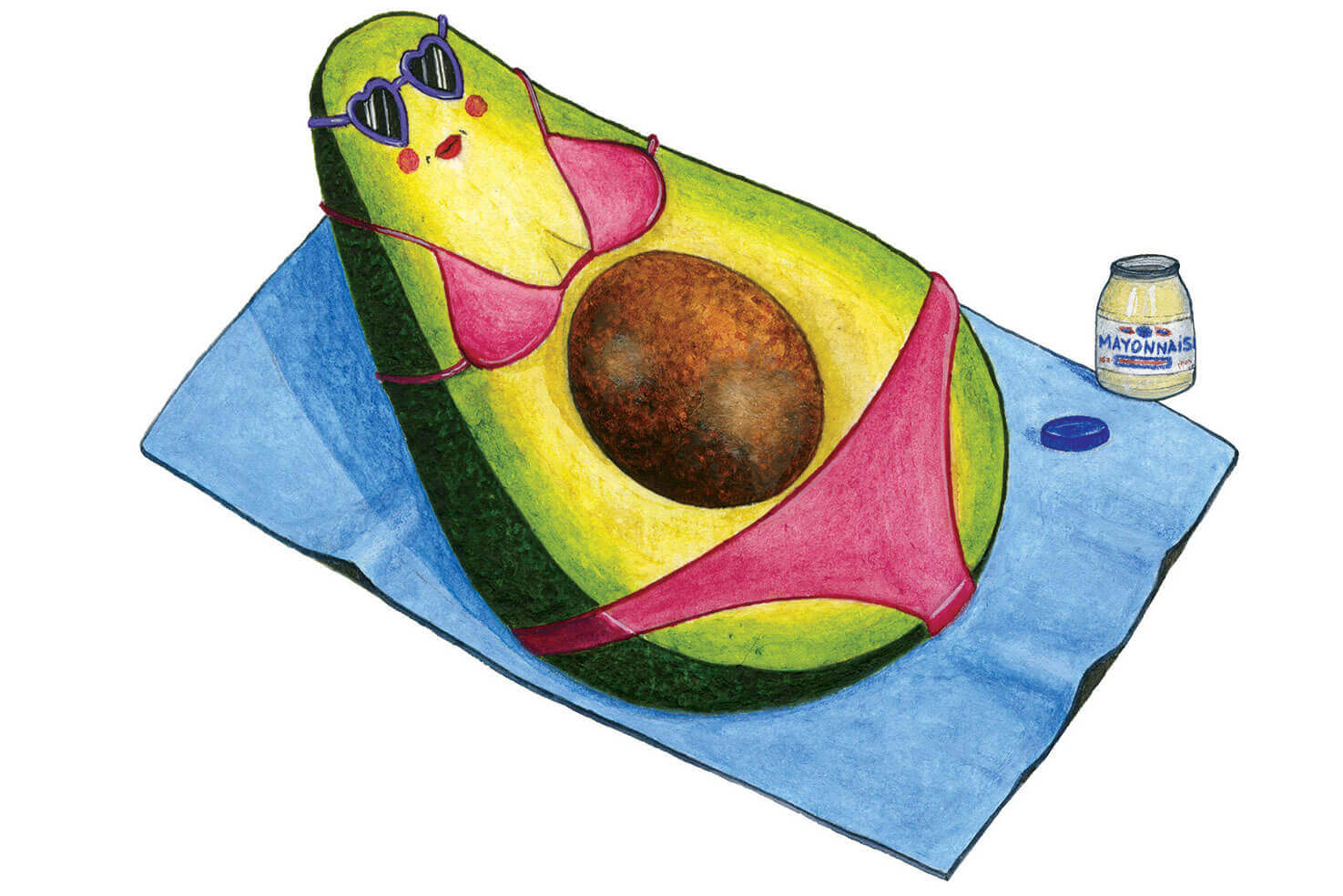 Bet you can’t name the three races of avocados!

The history of the avocado is a long and storied one: ancient Central and South Americans were eating them twenty-five hundred years ago; Europeans discovered their buttery appeal in the sixteenth century; Americans started growing them commercially in the 1900s. There are more than one thousand varieties (such as Zutano, Choquette, and Bacon, to name just a few) cultivated around the world from Mexico to  New Zealand to Israel. But it’s the Hass, first grown in Los Angeles County in 1926 and patented in 1935, that took the avocado from regional specialty to international stardom. Why? Because it was a solid bearer of fruit, people liked its rich taste, and it had a longer shelf life than other varieties. The past twenty years have ushered in an era of unprecedented avocado fanaticism in the United States, with domestic consumption growing from one billion avocados in 2000 to more than four billion in 2014. The Los Angeles market consumes the most avocados in the country, which makes sense, considering the harvest the Golden State produces each year.

“California fruit is the top of the line,” says Paul Romero, a district manager at Calavo Growers, a company that began in 1924 as the California Avocado Growers Exchange. He argues that because “the Hass avocado was developed right here in California, genetically it’s set up for California conditions.” Romero, who’s been in the avocado industry since 1978, told me that California avocado folks don’t really retire from the business, they “get old in it”—even in the face of droughts like the one that has recently plagued Southern California.

We’ve all heard the health claims—avocados are packed with potassium, fiber, and monounsaturated fats—and experienced how they make mediocre things taste more delicious, but what else is there to know about the alligator pear?

1. There’s record of an ancient folk recipe that used the avocado pit in rat poison, but modern health blogs encourage grating it over salads or blending it into smoothies for the added fiber and antioxidant benefits.

2. Avocados are classified into three races: West Indian, Guatemalan, and Mexican; the Hass variety is a Mexican-Guatemalan crossbreed.

3. The first-recorded avocado tree was grown in California in 1848. But it wasn’t until 1911, when budwood from the best avocado trees in Mexico was planted in California, and later still in 1913, with the surviving Fuerte variety, that we saw the rise of the California avocado industry.

4. The Hass avocado accounts for 95 percent of the American avocado market and 80 percent of global demand. Around 90 percent of domestically grown avocados come from California.

5. An avocado is a fruit, more specifically a single-seeded berry.

6. Avocados were known by the Aztecs as ahuacatl, meaning “testicle,” for their shape and supposed aphrodisiacal qualities.

7. Avocados can freeze during a cold snap, which forces the cells in the flesh and stem to collapse and then explode when the temperature warms, killing the fruit.

8. Avocado trees are evergreen and never go dormant, and while different varieties are harvested at different times of the year, Hass avocados are typically harvested from late February to late October and early November.

9. Avocados mature on the tree but only ripen once picked. It can take anywhere from a few days to two weeks for an avocado to ripen naturally at room temperature. A ripe avocado will keep in the refrigerator for seven to ten days.

10. A just-ripe avocado should have a little purplish blush to it and a gentle yield when pressed. If it’s pitch black, very shiny, smooth, and soft, it’s overripe.

11. Like humans, avocados can get sunburned, causing the skin in those spots to peel away and rancidity to spoil the outermost flesh.

12. Much like bay leaves, avocado leaves (hojas de aguacate), particularly those of the Mexican race, are used as a seasoning in Mexican cuisine. They’re available fresh or dried and impart a subtle anise-like flavor.

13. The darker green flesh nearest the skin is the most nutritious. Peeling off the skin, rather than scooping out the flesh, will get you the most phytonutrients.

14. The calories of an average Hass avocado are about 82 percent fat, making it one of the fattiest fruits in the world, up there with olives, which have about 80 to 90 percent calories from fat.

15. An avocado seed suspended over a glass of water with toothpicks will sprout a stem and roots in a few weeks. Once sprouted, the seed can be transferred to a pot and left to grow into a small plant. Once the plant is grown, it can be transplanted into the ground to grow into a tree. It may take years (five to thirteen) for the tree to flower or bear fruit, but it’s more likely that it won’t produce recognizable fruit at all without cross-pollination from another
tree. Grafting (splicing a scion of a mature tree with the rootstock of a seedling until it forms a new growth) is how professional avocado growers replicate their crop, and it encourages flowering and fruit bearing sooner, usually within three to four years.