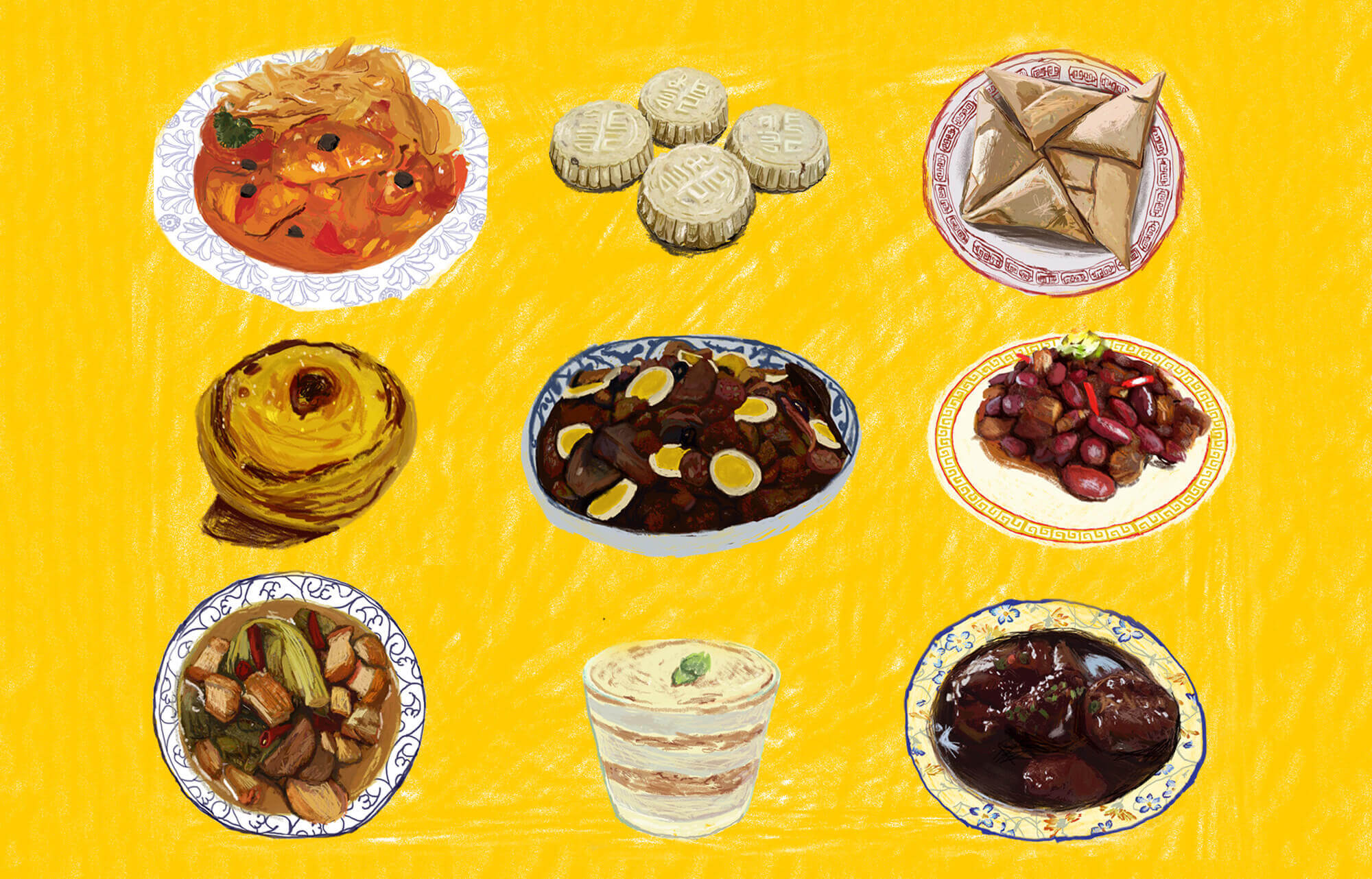 What happens when China, Portugal, and Las Vegas come together.

Just like the architecture, the food of Macau seamlessly combines a variety of unexpected influences. The Portuguese sailors who first settled in the region had a hard time re-creating dishes from home. It was nearly impossible to find Portuguese ingredients in the early sixteenth century. But these sailors weren’t actually doing the cooking. Their wives (typically from other parts of the Portuguese empire like Goa, Malacca, or Japan) were tasked with re-creating familiar dishes using local foodstuffs. Chinese lap cheong sausage replaced chorizo; coconut milk stood in for dairy.

But true Macanese cuisine isn’t as simple as a cross between Portuguese and Chinese, though these two cuisines compose the foundations. The food reflects the influences of the entire Portuguese empire; ingredients like turmeric and cinnamon from India and piri piri from Mozambique are common. European-style cooking techniques like baking and roasting are also widely used. David Wong, founder of the Macau Culinary Association, explains, “It’s a 450-year-old cuisine with its roots in Portuguese cooking traditions and is arguably one of the world’s oldest fusion cuisines.” The Portuguese handed Macau back to China in 1999, but their legacy is still deeply imprinted on the food. Here are some of the city’s most beloved dishes.

A standard menu item at many of the city’s restaurants, African chicken is one of Macau’s best-known dishes. It almost always comes served on a large plate, slicked with a chunky, piri-piri-like red sauce, and garnished with a few whole black olives, cornichon halves (sliced lengthwise), and a side of thinly sliced fried potatoes.

“[It’s] a result of borrowing ideas from Africa, with spices from Angola and Mozambique,” Wong explains. “Coconut and peanuts feature predominately, along with other ingredients like paprika, chili, and red bell peppers.” Purists might argue that African chicken isn’t technically Macanese because it’s a restaurant dish that dates back to the 1940s. According to a popular story, chef Americo Angelo of the now-closed Pousada de Macau was inspired to create it after trips to Portuguese colonies in Africa. Countless chefs around Macau have tried to re-create Angelo’s recipe since his passing in the 1970s, so every restaurant makes it a bit differently.

These savory pastries likely arrived in Macau by way of Goa, as they’ve been made in the Indian subcontinent since at least the fourteenth century. The Macanese version, though, has a clear Cantonese influence. They’re made with wrappers closer in texture to Chinese egg rolls and filled with a mixture of ground beef or pork (and sometimes cabbage) flavored with vinegar, cinnamon, coriander, black pepper, a hint of chili, and maybe saffron or paprika. Sometimes they’re even made with a more Indian-style filling of spiced potatoes and peas.

Despite its name, the common ingredients—curry powder or curry paste, coconut milk, and sometimes ginger—in this dish don’t exactly evoke images of Portuguese cooking. According to Abraham Conlon, co-owner of the Macanese-inspired Fat Rice in Chicago, settlers from other communities in Malaysia, Japan, and India were already making similar sauces before they arrived in Macau. “When the local Chinese first made contact with settlers, they thought the sauce was Portuguese,” he explains. Plus, the dish still features some ingredients common to European cuisine, like olives, tomatoes, and saffron.

The dish is especially popular in Macanese home kitchens. Each family makes their sauce a bit differently. Annabel Jackson, the author of Macanese cookbooks including Taste of Macau, explains, “I think we don’t actually understand what a curry sauce in Macanese cooking is because it varies depending on the blood of the family.”

It’s hard to visit Macau without eventually encountering its most popular street snack: a falling-from-the-bone pork chop sandwiched between a soft bun. (There are also many boneless varieties around town.) It’s the city’s answer to the burger and likely based on the bifana, a pork-cutlet sandwich popular in Portugal.

This fried-rice dish is meant for feasts. It’s packed with layers of meat—chicken, pork, beef, and sausage are common—and often contains sautéed vegetables, raisins, hard-boiled eggs, and olives. The connection to paella and the Portuguese interpretation arroz Valenciana is obvious. Conlon selected it as the namesake of Fat Rice after repeatedly hearing about it while researching Macanese food before opening. “It’s an over-the-top, hearty one-pot dish that had many different ingredients and influences that make up Macanese cuisine,” he told me.

Often associated with Brazil, this stew eventually found its way to Macau via Portuguese trade routes. But the Macanese usually use Chinese sausage and blood sausage rather than chouriço and replace black beans with kidney beans. Pig’s ear and trotter are also common ingredients. Actually, one of the first true Macanese dishes Conlon ever tried during his first visit to the city was a red-bean feijoada made with pig’s ear, tomato, and turmeric at Riquexó.

This fragrant dish is made from pork (usually belly or ribs) braised in a sweet-and-sour sauce of tamarind, jaggery, onion, garlic, and soy sauce. “Tamarind is widely used in Southeast Asia and India in particular,” explains Jackson. It also contains balichão—a strongly flavored but vital Macanese ingredient made from tiny krill fermented with brandy, bay leaves, Chinese wine, chili, and lemon. It’s similar to Malaysian shrimp paste (belacan) but not as salty. Jackson adds, “For me, tamarind pork is one of the most quintessential Macanese dishes, actually, because of the use of fermented fish.”

Traditionally made in Macanese home kitchens, minchi consists of finely chopped leftover meats served with crispy cubes of Portuguese-style potatoes and a fried egg on top. The name is possibly a corruption of the word mincemeat, evidence of the British dominance of the region’s trade in the nineteenth century. Its salty flavor comes from soy sauce, but Worcestershire is also a common addition, as is molasses. “Minchi may have existed before, but it probably was one of the later dishes that started after the British arrived in Hong Kong,” explains Jackson. Wong calls it one of Macau’s most popular comfort-food dishes.

Diabo is another dish that exhibits both English and Cantonese influences and uses leftover meats (a breaded pork chop is key, but beef, poultry, or ham also work). “It’s a pretty rare dish that came about after large holiday celebrations,” explains Conlon. “It’s become a Boxing Day tradition.” Jackson likens it to a spicy Macanese version—richly flavored with mustard, pickled shallot, ginger, and vinegar—of the British favorite bubble and squeak. The name is derived from the generous amounts of chili that some cooks like to add to this curry-like stew.

Egg tarts are absolutely everywhere in Macau. Whether the Portuguese introduced their famous pastéis de nata to China centuries ago or the other way around, Macau’s version, with its brûléed custard, hews closer to the Portuguese version than the Chinese dim-sum staple. Macau’s egg tart was actually popularized by Englishman Andrew Stow at the tiny Lord Stow’s Bakery in Coloane in 1989. Jackson believes he was likely inspired by a Portuguese pastry chef making them at the Hyatt in the 1980s. Stow’s version is denser and less sweet than the Portuguese variety and also borrows from elements of English custard.

Anyone familiar with the Portuguese penchant for puddings and custards will find something recognizable in serradura. This layered pudding is a descendant of the Portuguese bolo de bolacha, a mousse-like cake made with sweetened condensed milk and whipped cream. Often compared to tiramisu, serradura is a pudding made from cream and sweetened condensed milk layered between finely crushed tea biscuits (usually Marie cookies). (These crumbs give the dish its name; serradura means sawdust in Portuguese.) Jackson believes the quality has gone downhill since the handover back to China in 1999; Portuguese condensed milk is no longer as easy to find.

The streets surrounding the Ruins of St. Paul’s feature perhaps the greatest concentration in the world of stores selling almond cookies. The dough is a simple mix of flour, sugar, and ground almonds that is then pressed into disks with Chinese characters and baked over charcoal. The resulting cookie is like shortbread, but more crumbly and less sweet.