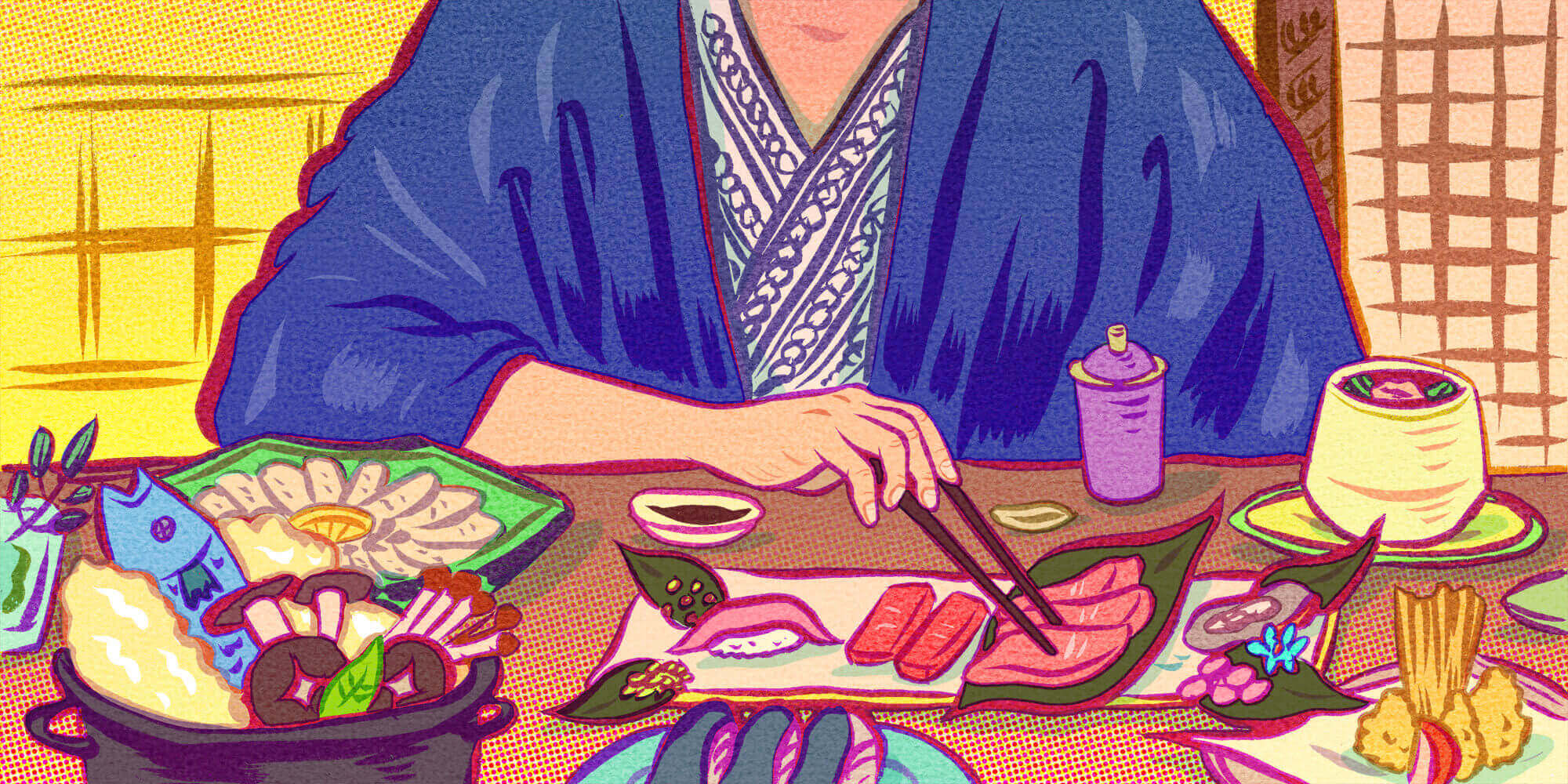 A guide to the super seasonal Japanese style of dining.

It’s become common for chefs like Corey Lee or Thomas Keller to cite kaiseki as an inspiration for their refined, tasting menu restaurants. But what is kaiseki, exactly?

The kaiseki that chefs around the world are referring to is “formal occasion kaiseki,” which evolved from a simpler and older style of Japanese dining, which we’ll call “tea kaiseki.”

The characters for tea kaiseki translate literally to “bosom pocket stone,” and supposedly have their origins in the Zen monk practice of placing warm stones in the front fold of their robes to ward off hunger. This anecdote is a little suspect, but it does do a great job of underscoring the strong historical connection between tea culture and Zen Buddhism.

True tea kaiseki is served at formal Japanese tea gatherings. These are typically invitation-only affairs, but these days you can book a tea-ceremony experience with tea masters that is a good approximation of the real deal. A formal ceremony lasts around three to four hours. According to Michael Drzmisek Sozui, a Swiss tea master who practices at Kanjoan in Kyoto, you don’t get to drink your first cup of tea (which is so thick that it’s almost a paste) until two hours in—so you’re served a light meal in the interim.

There are many variations on the structure and style of tea kaiseki meals, but the widely accepted standard is ichiju-sansai (one soup, three side dishes) bookended by rice and tea sweets. Sozui stresses that it’s a light meal in every sense of the word; each course is no more than a few bites. Cooking techniques are simple, so that the flavor of the seasonal produce used to make the dishes shines through. “The main idea,” he says, “is that it’s just enough food so you don’t feel hungry anymore.” The meal is by no means the focal point of the tea gathering. “We should be delighted—it should be nice—but it’s very simple. In tea, the kaiseki is just one step up the top of the mountain. It’s to prepare you for the koicha (thick tea). That’s what you came for.”

In formal kaiseki—the kind of kaiseki that most foreigners are conjuring when they use the term—the focus is very much on the food; everything else serves to complement or augment the eating experience. It’s mostly associated with old imperial capital of Kyoto, though you’ll find it in restaurants and high-end inns all over Japan.

The best kaiseki meals have a ceremonial feel. The restaurant’s doors are made of paper and wood, and slide rather than swing open. Diners and the kimono-clad wait staff alike take care to speak in hushed tones. You will eat alone with your group in a private tatami-mat room, and the servers will shuffle in on their knees, pour your drinks, and deliver food with uncommonly fluid grace.

Japanese chefs always take pains to emphasize that their cuisine is seasonal (sometimes as if no other culture’s is), but in kaiseki this obsession is taken to the next level. Yoshihiro Murata, chef of famed Kyoto restaurant Kikunoi and third-generation kaiseki chef, has proclaimed that “kaiseki is eating the seasons.”

A kaiseki meal will consist overwhelmingly of hyper-seasonal ingredients—mainly fish, vegetables, foraged plants, and fruit. It’s the magic of kaiseki that menus can (and do) change drastically within the space of days, all the while retaining the same complexity. In Japan, any given micro-season has produce for which chefs must learn various preparation methods. Japanese diners expect this; certain dishes are firmly associated with a given season. Spring means simmered bamboo shoots, autumn means matsutake mushroom broth and chestnut rice, and so on. Even the tableware changes with the seasons: some restaurants, like Kikunoi, have completely different table settings for each month of the year.

But a kaiseki dinner is not a procession of one super flavorful dish after another; instead, “it’s a wave,” says Hiroto Tanaka, an apprentice at Miyagawacho Suiren in the Gion district of Kyoto. He draws an imaginary line on the wall, and then another line a few inches above. “The bottom line is your minimum threshold of deliciousness. The top line is superlative, awesome delicious. Every dish has to at least cross the bottom line, otherwise it’s crap. But you can’t hit the top line with every single dish, or your palate gets tired. Kaiseki is not about hitting the top line at every single dish. It has to build up over the course of the meal, up and down—but not too far down—and then reach that climax nearer the end.”

This is why you rarely leave a kaiseki restaurant feeling like your liver has morphed into foie gras. You feel stimulated, like dinner was a yoga session for your taste buds. But this is also why, for the kaiseki initiate, some dishes in the meal can seem almost forgettable—they’re functionally filler between the little climaxes over the course of dinner. An American friend who’d eaten at Tempura Matsu in Kyoto felt the same way. “Not everything impressed me, you know?”

Of course, kaiseki isn’t an entirely static tradition. Cuisines are always in a state of flux, and there are outliers like Giro Giro Hitoshina, which Tokyo-based food writer Robbie Swinnerton described as “punk kaiseki” for its less-formal take on the cuisine; or that spot Tempura Matsu, which has received attention for theatrical dishes like noodles set in a hand-carved ice block and an oyster gelée over rice that melts dramatically when set in a sizzling-hot stone bowl in front of you. Even the doyen of kaiseki cuisine, chef Murata of Kikunoi Honten, incorporates French elements and techniques into his food.

But it’s true that, unlike many of the western restaurants that it has influenced, a kaiseki meal rarely sets out to impress or wow. On the contrary, it can feel rather subdued and rigid. Some diners leave bewildered and underwhelmed. Some struggle with the subtle flavors. But central to the dining experience is appreciating the immense craftsmanship behind the smallest details. Much of kaiseki is the skillful use of simple cooking techniques to draw out the essence of the seasonal ingredient at hand. With luck, you’ll encounter a chef who makes an unforgettable dashi broth, or who can elevate plain short-grained rice to rarefied heights. If that appeals, kaiseki is an unmissable experience.