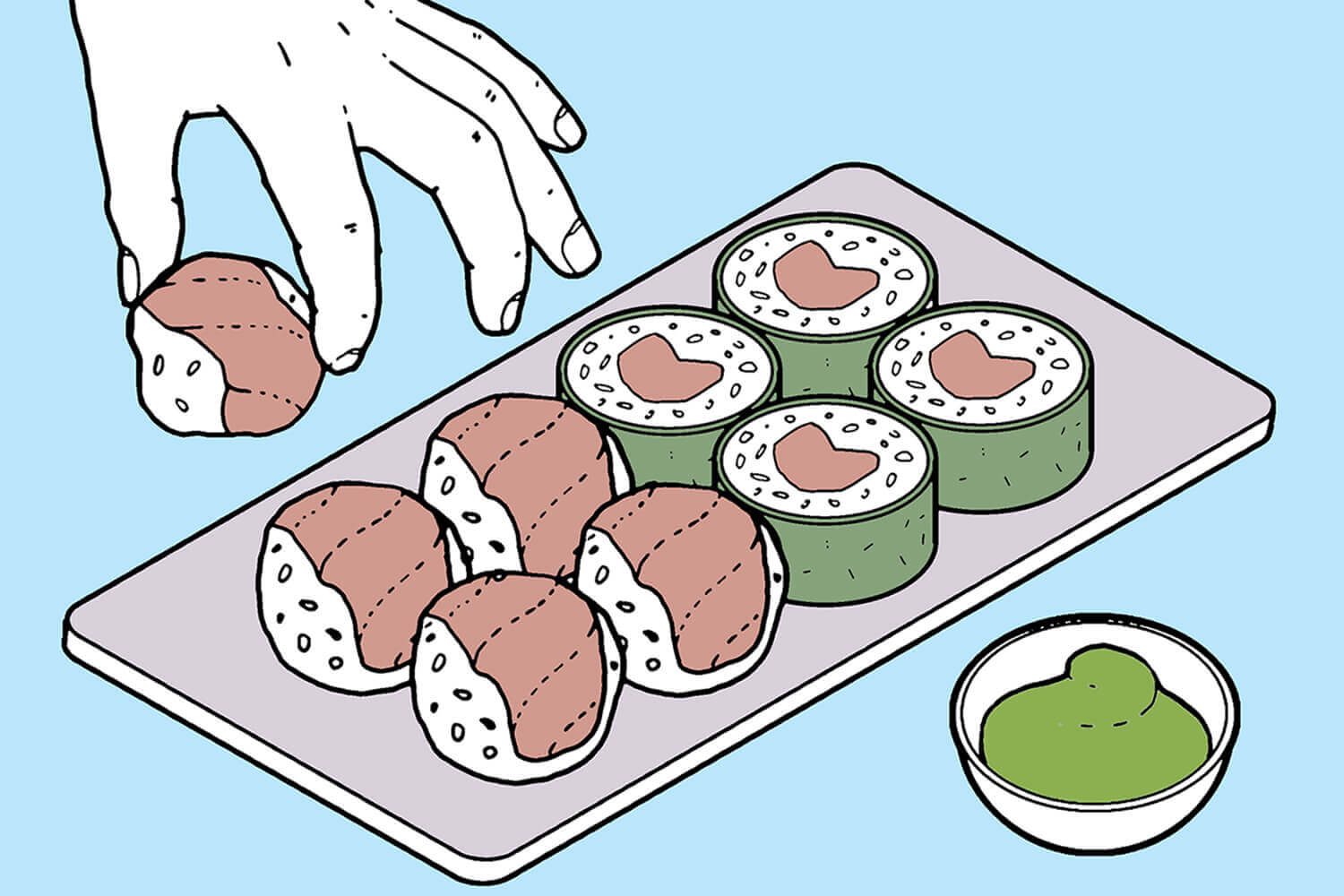 Two styles you should know.

Making sushi is more complicated than it seems, but it doesn’t have to be. One problem is that most people expect sushi to be nigiri-zushi—that is, made with pressed rice and mostly fish—a skill, ude, often judged by the degree, kagen, by which the chef seasons and presses the rice. It takes years of hard work and commitment to learn these subtleties. Even a sushi master can’t teach you the craft. You have to earn it. I certainly couldn’t teach anyone. Once, in my twenties, I tried making nigiri, following Shizuo Tsuji’s seminal Japanese Cooking: A Simple Art. I spent a small fortune buying the ingredients and hoped my husband would enjoy my labor of love. But as the son of a fisherman who had worked at the Tsukiji fish market hauling fish to pay his way through art school, he spoke his mind clearly. “This sushi tastes bad,” he said. I failed miserably at both the rice and fish. I don’t remember who started the food fight, but my mediocre creations were soon flying across the kitchen, with a few sushi stuck on the wall like refrigerator magnets. I have never made another nigiri sushi.

Japanese people seldom make nigiri sushi at home because they can get good sushi at depa-chika (the food section in the basement of department stores) or go to the neighborhood sushi restaurant. It’s like baking bread: The incentive to make it a home is low because there is a corner baker who does a better job.

What they do make is chirashi “scattered” zushi (the no-mold kind), te-mari zushi (ball-shaped sushi), and maki zushi (sushi rolls). Te-mari zushi and maki zushi in particular are more appropriate for the home cook because the bamboo mat, or plastic wrap, acts as a guide to shape the rice and toppings or fillings into sushi.

Sushi can be made with a variety of ingredients—you are not locked into Japanese tradition—so long as the ingredients are fresh. That’s particularly true when using fish. I don’t buy fish from the supermarket when making sushi. I opt instead for a specialty seafood store where I can talk to the staff who are willing to answer questions about the fish: where it came from, when it came in. I also often buy fish from Kai Gourmet, a wholesaler that also sells to retail customers online. It is a reliable source that also supports sustainable fishing practices. If appropriate fresh fish is not available, try smoked ocean trout or salmon, or use vegetables like grilled whole shiitake, blanched asparagus tips, roasted baby carrots, and pickled plums. You could also experiment with meats like thinly sliced steak and prosciutto. Herbs, a sliver of citrus peel, and spices like pepper brighten the neta.

Use short-grain cultivars of Japonica, such as Koshihikari or Akitakomachi or medium-grain Japanese-style white rice like Koda Farms. These varietals are sticky in nature, which enables you to mold the rice.

Sushi rice is flavored with sushi-su, sushi vinegar made with rice vinegar, sugar, and sea salt. The ratio varies from cook to cook. Some people like their sushi rice sweet. I don’t like to season the rice too strongly because it overwhelms the fish on top. I mix six ounces of unseasoned rice vinegar with five tablespoons of cane sugar and one tablespoon of sea salt. Use about one to one and a half tablespoons of sushi-su for each cup of cooked rice. The seasoned rice vinegar keeps for six months in a dark, cool place.

There are many grades of nori available in the United States. Good nori is crispy, melts in your mouth, and has a subtle sweetness and nice ocean smell. At the high end, there is nori from the Ariake Sea, off the island of Kyushu in Japan. At the cheaper end, you can find nori from elsewhere in Japan, China, and Korea. Cheaper nori can fall apart and tends to be thin and flavorless. You want to get unseasoned high-grade nori for wrapping sushi, as the nori’s flavor and crispy texture add to the sushi experience and hold the rice in place. Nori is highly susceptible to moisture, so make sure to keep it in the bags until ready for use.

This ubiquitous seasoning is made from fermented soybeans, water, wheat, and salt. Some sushi chefs prepare nikiri shoyu, a milder soy sauce seasoned with a little mirin, sake, and kombu, heating the mixture to cook off the alcohol. At home, I use all-purpose soy sauce, koikuchi shoyu, for dipping sushi. Kikkoman, Higeta, and Yamasa soy sauces are available in Japanese markets. Artisan soy-sauce brewers like Naoeya Genbei make small batches of naturally brewed soy sauce but don’t export abroad. Look for those soy sauces when you visit Japan. Keep soy sauce in the fridge after opening, and use within a couple of months for best flavor.

A potent condiment essential to sushi and sashimi. Grated fresh wasabi root tastes best, but both imported and domestic wasabi are expensive. Some U.S. producers are growing wasabi in Oregon and Northern California that can be purchased at Japanese markets or online. Because of the high cost of fresh wasabi, most people use commercial wasabi paste or powdered wasabi mixed with water as a substitute. They contain horseradish, mustard, green food coloring or spinach powder, and starch.

To cut boneless fish fillets, I use a long and slim yanagi–bocho sashimi knife. To prepare fish, cut the fillet across the grain, about a quarter-inch thick, drawing the knife toward you in one even stroke. Don’t saw the fillet, or it will be rough in texture and unappealing. I also use a santoku knife—the name means “three virtues,” because it’s an all-purpose knife meant to cut meat, fish, and vegetables. If you have a super-sharp Western knife, that will do for beginners. You might later want to invest in a Japanese knife and hone your knife skills further.

These are always handy for scooping and tossing the rice.

How to Prepare the Rice

When people want to learn about Japanese cuisine, I tell them to start with rice. Sushi is essentially made of two parts: rice and fish. It’s the fish that gets the most attention, but rice forms the foundation. If you take that route, start by washing the rice in water by gently swishing and swirling it with your hands in a bowl. Drain off the cloudy water. Combine the rice, a two-inch piece of kombu seaweed, and measured water (110 to 120 percent of volume of the uncooked rice) in a heavy pot. Let stand for thirty minutes. Cover and bring to a boil over high heat. Once the rice has reached a boil, reduce the heat to low and cover the pot. Cook for twelve to fifteen more minutes. Remove from the heat, and let stand without uncovering for ten minutes. Whether you used a pot or a rice cooker, once the rice is cooked, discard the kombu, transfer the rice to a wooden sushi-rice tub or a large bowl, and add the vinegar mixture, cutting it into the rice with a wooden paddle without mashing the grains. Cover the rice with a damp dish towel to keep the rice moist. It should be kept at room temperature and used within a day.

How to Make Te-Mari Sushi

To assemble the te-mari zushi, get a piece of plastic wrap large enough to drape over a teacup or small bowl. The plastic wrap will serve as a guide to shape the ball and keeps the rice from sticking to your hands. Place a bite-sized fillet or sliced vegetable into the plastic-lined teacup or bowl. Then add a tablespoon or two of sushi rice to cover the fillet. Now lift the plastic wrap along with the rice ball out of the teacup with your hands, and twist the end of the plastic wrap and gently mold into a ball. The ball should be firm on the outside, fluffy inside.

Unwrap the plastic wrap and transfer the te-mari zushi to a platter. You can reuse the plastic wrap as you go. Garnish the sushi with a pinch of lemon zest, grated ginger, minced chives, or a sprig of dill, and serve with wasabi and soy sauce.

How to Make Maki Sushi

When making maki sushi with tuna, it gets its own name, tekka maki. It is a good sushi roll for beginners who want to practice rolling sushi with the bamboo mat, using a single filling.

To make tekka maki, cut an eight-inch-long fillet into strips. In a finger bowl, combine water with a tablespoon of rice vinegar. Take a halved sheet of nori seaweed and place it on the bamboo mat, shiny side down, with the long edge toward you. Moisten your hands with the vinegared water—it keeps the rice from sticking to your fingers—then clap your hands like sushi chefs do to get rid of the excess moisture.

Scoop up about three-quarters of a cup of sushi rice, and evenly spread a quarter-inch layer over the nori to the edges of the sides and bottom and within a half-inch of the top. If you like your sushi hot, dab a thin line of wasabi paste across the bed of rice. Then place the tuna lengthwise across the center of the rice bed. Now lift up the mat with your fingers, and roll over the rice bed until it forms a cylindrical tube. Press the bamboo-covered roll firmly to compress the roll enough to cut easily. Last, wipe your knife with a damp cloth, then slice the roll in half crosswise. Cut each half into thirds, and transfer to a platter. Serve the tekka maki with soy sauce and pickled ginger. This technique works with many other rolls. Use cucumber for a kappa roll or pickled daikon radish for a takuan roll.