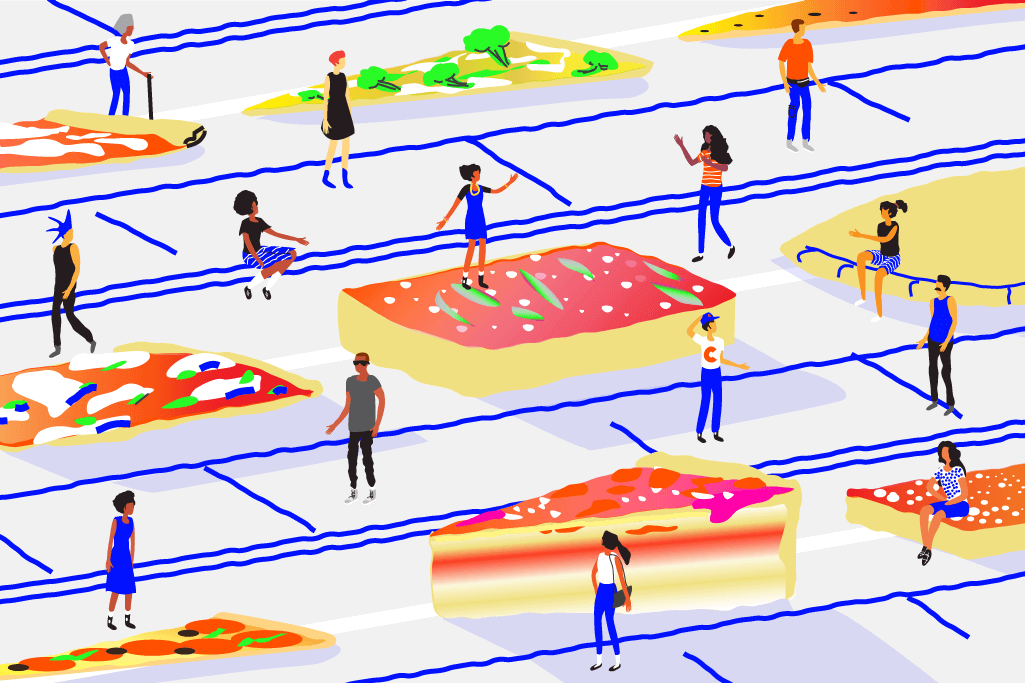 Twelve styles you need to know.

Pizza is as American as apple pie. Which is to say, it’s not from here but once it arrived, we latched on and never let go. The first known appearance of pizza stateside occurred in New York City in 1905—a fact that New Yorkers love to lord over the rest of the country. But the U.S. of A. has since become home to a robust regional pizza scene that goes far beyond the Big Apple. Unburdened by law or reason, pizza was able to experience its fullest expression on this side of the Atlantic.

No doubt, the more persnickety pizza eaters will raise a stink about the omission of grilled pizza, Ohio Valley style, French bread pizza, Old Forge style, pizza parlor pizza, or any of the countless other ways to top a flatbread and give it a cool name. But for inclusion in this list, a pizza must be rooted in a specific region, have unique characteristics that distinguish it from the other styles on the list, and be sold at multiple establishments in the same region. Also—it must have toppings. No sauce or cheese? That’s just bread.

In New Haven, pizza is “apizza” (ah-BEETS), cheese is “mootz” and “plain” means no mootz, just sauce. The opening of Frank Pepe’s on Wooster Street in 1925 marked the beginning of a pizza explosion in this town of Italian immigrants. (The name “apizza” is thought to be a pronunciation from the Neapolitan town of Maiori, where Pepe was from). Although Pepe’s calls itself a pizzeria Napoletana, the style is distinctly New Haven: the dough is long-fermented and shaped into circular, oblong, or even rectangular pies that are cooked in coal-powered ovens. Locals claim the high-mineral content of New Haven’s tap water leads to a crispier crust. As for the toppings: anything goes, but Pepe’s invented the now-famous white clam pizza, which goes great with bacon. In 1934, Modern Apizza set up shop on State Street, and in 1938, Pepe’s nephew opened Sally’s, also on Wooster Street. A local rivalry was born.

Deep dish was invented in 1943 at Pizzeria Uno. To distinguish themselves from the other pies in Chicago’s Little Italy, owners Ike Sewell and Ric Riccardo made a larger, deeper pizza, chock-full of toppings, baked like a casserole in a high-sided pan. The crust is often thick and yellowish (thanks to the addition of cornmeal or semolina), and the pies usually come with the sauce on top, so that the cheese doesn’t burn during the long bake time. While deep dish is often compared to sfincione, the Sicilian tomato, cheese, anchovy, and breadcrumb-topped focaccia, it’s round rather than rectangular, and is sliced in wedges. A variation on deep dish, stuffed pizza, was introduced in Chicago at Giordano’s and Nancy’s in 1974 and features a second, thinner crust on top.

AKA: Chicago style
Origin: Chicago
Where to get it: MyPie Pizza

Featuring an unleavened, ultra-thin cracker-like crust and a topping of Provel—a processed cheese blend of provolone, Swiss, and cheddar—St. Louis–style pies are large and cut into numerous square tiles (referred to as tavern- or party-cut). Thin crust and square cuts can be found throughout the Midwest, but Provel makes it St. Louis. Get it with sausage, mushrooms, onions, green peppers, and bacon (“The Deluxe”) at its birthplace, Imo’s, for a true St. Louis experience. Note: this is often likened to the Chicago thin crust pizza.

California-style pizza is defined not so much by its crust or method of preparation as by the inventiveness of its toppings—and its departure from what every other state thinks of as pizza-appropriate. Cheese Board Collective in Berkeley has been selling one style of vegetarian pizza per day since 1985. (Tonight’s pie, for example, features crimini mushrooms, baby spinach, caramelized onions, mozzarella, fresh asiago, pine nuts, garlic olive oil, and parsley.) Across the street at Chez Panisse, Alice Waters has made Provençal-style pizzas topped with seasonal vegetables since she built her wood oven in 1980. But it’s Wolfgang Puck, and his original Spago pizza chef, the late Ed LaDou, who put California pizza on the map with novelties like the barbecue chicken pizza. LaDou later created the original menu for California Pizza Kitchen, before opening his own place, Caioti, in 1987.

Although high-quality pizza arrived in this country via New York, the city is famous for a simple style best described as dollar slice. It appears that once Neapolitan pizza came to the city and was enlarged from individual to family size, an entire pizza became much too large for on-the-go eating, and pizzas began to be sold by the slice. With an emphasis on portability, the dollar slice is thin and topped with low moisture mozzarella and little else (pepperoni is okay). It’s designed to be folded in half and devoured en route to wherever it is that busy New Yorkers are always going.

First introduced to New York in 1905 by Neapolitan immigrant Gennaro Lombardi, New York-style pizza mirrors Neapolitan pizza’s thin, foldable crust and sparse toppings, but it differs from the Italian model in a few key ways. The pizzas are usually much larger, designed to be sliced rather than served whole. Proper New York pizzas are baked in coal or electric ovens, rather than wood-fired ones, and have a crisp crust from tip to edge, with none of Italian Napoletana’s soupy middle.

When sfincione made its way to New York via Italian immigrants, the Sicilian was born. It has a thick, bready crust topped with mozzarella (something you’d never find in Sicily) and tomato sauce—sometimes in that order. Pepperoni is also a common addition. It’s baked in steel pan, giving it a crunchy bottom, and cut in squares for by-the-slice ordering. In Italy, you’ll find it at bakeries (never pizzerias), but in America, it’s spawned an entire genre of pizza parlors. Sicilian is particularly popular in Detroit, where Buddy’s Pizza claims to have introduced the style in 1946.

Grandma pies are meant to emulate the kind of home-baked ones that nonnas have made forever in their kitchens in Italy, known as pizza alla casalinga (“housewife pie”). They’re baked on sheet pans and topped with whatever’s lying around. The crust is chewy and thicker than a Neapolitan pie, but much thinner than spongy Sicilian. Umberto’s in New Hyde Park, New York, claims to have invented grandma pie in the eighties, but can anyone really lay claim to what Italian grandmas have been doing for centuries?

Another descendant of the Sicilian, tomato pies are one of the few regional pizza styles to feature a tomato sauce that is cooked before baking. They’re often topped simply with romano or parmesan, oil, and garlic powder—after baking. Buy them by the square at bakeries like Iannelli’s in South Philly, which claims to have baked tomato pies since 1910.

A round pizza with a thicker crust (not quite as thick as the Sicilian), Trenton’s pies are notable for their chunky tomato sauce—basically just crushed plum tomatoes plus seasoning—which goes on after the cheese and toppings. Papa’s, which opened in 1912, calls itself the oldest pizza restaurant in the U.S., claiming that the ten-year closure of Lombardi’s in New York (established 1905) strips the New York institution of its title. Notably, Trenton’s most famous tomato pie outposts (Papa’s and De Lorenzo’s) have both moved from Chambersburg, Trenton’s former Italian enclave, to the nearby township of Robbinsville, making the “Trenton” more historical than accurate.

Greek Pizza isn’t pizza topped with olives and feta, or Mediterranean-inspired in any way (unless you count the vague Italian origins it shares with all pizza). It is, strangely enough, a style found mainly in Greek-owned New England establishments that also sell pasta and/or gyros. Greek pizza is proofed in an oily round pan, then topped with cooked tomato sauce (often laced with tomato paste and copious amounts of oregano) and a combination of easy-melting cheeses (mozzarella, cheddar, and provolone are all options). A spongy, greasy crust meets a crisp-fried bottom in this New England classic. Specific origins are unknown, but Greek pizza is especially prevalent in Boston. Western Canadians claim to eat the same kind of pizza, but, hey, this isn’t a guide to the pizzas of Canada.

Origin: New England
Where to get it: George’s Pizza House, Harwich Port, Massachusetts

One night in 1999, a Pizza Mart cook left some dough on the counter and closed up shop. In the morning, owner Chris Chishti attempted to salvage the leftover dough by combining it with a fresh ball and baking the whole mass together into one giant pizza. Since then, he’s been selling jumbo slices to the drunk folks of D.C.’s popular nightlife neighborhood, Adams Morgan, along with a host of imitators (in the early aughts, Chishti even got into a neon sign war with Kerry Guneri of Pizza Boli’s). Christi’s pizzas have grown in diameter from twenty-two inches in ’99 to thirty-two inches in 2004, with some competitors claiming even jumbo-er slices. Chishti’s pies are made with purchased dough and a mozzarella-provolone blend, and spend a good deal of their lives under a heat lamp. Their outrageous size means that the tip of the pizza must often be folded over to fit onto the plate or into a box, which makes it look like the jumbo slice has been topped with a normal sized pizza slice.