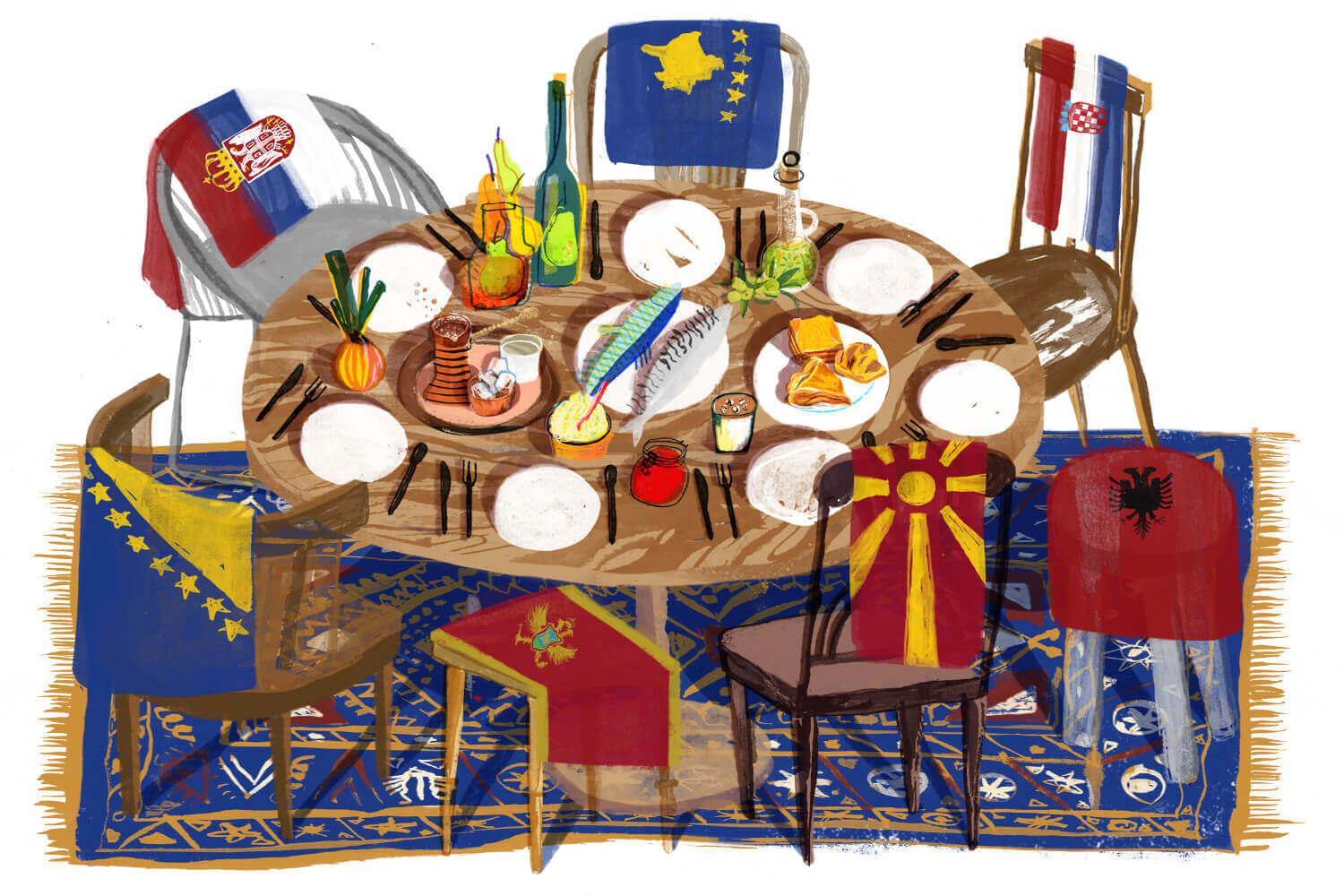 Specialties of the eastern Adriatic.

As the physical and culinary crossroads of Orient and Occident, Balkan flavors have roots in many sources. In Balkan food, as in its social landscape, the exquisite rubs up with the unresolved, the old with the new. Turkish herbs blend with recipes from Italian fishing boats. Grandmothers press cheese curds by hand while plastic ice cream wrappers litter the beach. Fresh, lush figs sprout up between concrete skeletons of unfinished hotels.

In this complex region still coming to terms with its communist past and with conflict based on differences between religious and national groups, food in the Balkans is a unifying element. (Indeed, who and what constitutes the Balkans is a long-contested topic; here I consider the countries of the Western Balkans, those that run alongside the eastern Adriatic coastline: Croatia, Bosnia-Herzegovina, Montenegro, and Albania, and, just inland, Serbia, Kosovo, and Macedonia.)

Outsiders eating and drinking their way through the region will find more similarities than separation across the borders, despite cuisines ranging from sunny coastal fare to high-altitude dishes of game and mushrooms.

Balkan generosity is celebrated by sharing shots of clear rakija, a strong moonshine-like brandy found across the region, distilled from pear, plum, apple, quince, or grape. While your host may insist that good rakija won’t give you a hangover, at up to 50 percent alcohol, you’ll want to keep note of how many times you hear the call of “Zivjeli!,” indicating that another round is up. To temper the effect of such occasions, there is medovaca, a plum brandy with added honey often sipped alongside morning espresso in Croatia.

Ajvar is a relish of seasoned, blended roasted red peppers that is used as a topping for bread, vegetables, and meats, or as a general dipping sauce—for everything, in other words. Originally invented as a frugal substitute in Belgrade restaurants for caviar (with which it shares an etymology), ajvar is prepared in the autumn and canned for consumption throughout the year. Once the peppers are roasted and blended, the resulting mush is stewed with vinegar, oil, and salt, and reduced before being hot-packed into jars. The versions available on the supermarket shelves are mild, but homemade ajvar varies greatly: from sweet to very spicy, sometimes incorporating eggplant or garlic.

Ubiquitous throughout former Yugoslavia, börek, or burek, are pies of ruffled layers of phyllo pastry filled with meat, vegetables, or cheeses. The dough is brushed with olive oil and stuffed and crowded into a pan, and then baked. Portioned out in rectangles, triangles, or segments of a long spiral, the börek is eaten as fast food, often with yogurt, and sprinkled with sesame seeds, and can be found in specialty bakeries or with street vendors called byrektore.

Between the sheets, Albanians prefer theirs with gjize, salted curd cheese, or stewed minced meat and onions, but one can also find vegetarian versions made with nettle or spinach, which have overtaken the popularity of leafy wild greens like sorrel, dandelion, malva, and lamb’s-quarters. Bosnian Muslims prepare a special type with egg-based dough called somun for breaking the fast during the month of Ramadan.

Prazan, the unstuffed version of börek, serve as a carbohydrate mop-up accompaniment to meat dishes. On the worst end of the spectrum, the result is like soggy layers of wet cardboard. Well-made prazan has a slightly acidic, salty flavor with a crispy top that contrasts the soft internal layers.

This fermented drink comes in two forms these days: a more traditional variety that is slushy, sour, and ever-so-slightly alcoholic, like kombucha; and a tooth-numbingly and artificially sweet modern rendition, found spinning in granita machines at cafés.

Boza can be made from any grain, but millet is the most common and is generally considered to yield the most delicious versions. During production, the grain is crushed and boiled, then water, sugar, and some previously made boza are added, and the mash is left to ferment for around twenty-four hours in a warm room. When fermentation ends, boza is served cold in tall glasses.

Like many traditional Balkan foods, young people generally leave the drink to older generations, so tavern-like boza shops have largely died out.

Cevapi (from the Persian word kebab) are a type of cooked skinless sausage, generally served pressed into toasted flatbreads or buns smeared with ajvar, herbs, and a handful of raw onions. These cylinders of ground meat are considered a national dish in Bosnia-Herzegovina, but are found in any town across the region. Serb cevapcici are made of either beef, lamb, or pork, while Macedonian and Croatian varieties are often made of mixed meats, such as pork and beef.

In the summer, the aromas of sweat, searing cevapi, and secondhand smoke mingle in the very commonplace outdoor kitchens. No amount of carefully written copy in guidebooks can sum up a region so succinctly as this smell.

Upon entering any home in the Balkans, you will undoubtedly be offered a coffee. This coffee will most likely be “Turkish style”—simmered stovetop in brass coffee pots called cezve, then poured unfiltered into small glasses or cups where the powdery fine grounds settle to the bottom. Variations in method are treated as serious cultural keys; the difference between an Albanian and a Bosnian coffee comes down to when and if sugar is added.

Outside of the domestic sphere, coffee is a deeply coded activity; the bulk of social plans revolve around hanging out over espresso at all hours of the day and night. Requesting a professional meeting without first having a coffee is viewed with skepticism.

For the morning’s freshest saltwater catch, villagers go to the docks to meet boats piled with pilchard, swordfish, mackerel, tuna, and anchovies that are hoisted up out of the Adriatic.

Grilled fish (or “fish on fire,” as it is often amusingly translated) is a coastal mainstay. At many restaurants, diners choose whole fresh, raw fish presented on a cart. After being wheeled back into the kitchen, the same fish is (presumably) prepared for you, and most likely served with a side dish of boiled potatoes and blitva, Swiss chard.

A dairy product made from the milk of cows, sheep, or goats, kajmak’s consistency varies from milky and runny to a thicker consistency, akin to yogurt. To make kajmak, milk is simmered for two hours, removed from the heat, skimmed of its cream, and left to chill and mildly ferment for several hours to days.

Kajmak owes its deliciousness to a high percentage of milk fat, typically about 60 percent. It’s equally at home served sweet—drizzled with honey—or savory, sprinkled with herbs and served on bread. Most sellers will offer choices of salted or unsalted, young (mlad) and slightly older (star). The best versions will be found at local farmers’ markets; opt for a vendor who has brought their product to market with some form of refrigeration.

Peppery, with a bite at the back of your throat, olive oil made from the Zutica variety of olive routinely shows well at olive oil competitions. Zutica come from the coast of Montenegro. During communal olive harvests in Ulcinj, villagers pass on generational lore and tricks of the trade, such as planting basil around the trees to promote better flavor. Families work together for weeks during the harvest, resting for midday picnics of roast lamb and rolls. Sons are taught to prune and daughters to pick. Visitors can find the golden-colored oil for sale locally at stands along the road or directly at the small communal mills that batch-press each family’s harvest.

Most people buy produce at farmers’ markets, held biweekly in larger towns, though supermarket purchasing is on the rise. The two staple salads of the Balkans are dictated by what is widely available: shredded raw cabbage with white wine vinegar in the winter; chopped tomatoes and raw onions with white wine vinegar in the warmer months. Raw onions are so pervasive within cuisines across the region that they can often be noted as the top olfactory note of the populations’ perspiration. Sweeter are the orange trees that grow on either side of Dubrovnik’s city walls—the trees in flower have a scent worth smelling before you die. Throughout the region, citrus and pomegranate trees brightly speckle the landscape.

Both familiar and mighty, the sweet chestnut is native to the Balkans. Chestnut trees are effectively extinct in the United States, but Montenegro’s plentiful chestnut forests are home to trees up to eight feet in width. In Gornji Stoliv, in the Bay of Kotor, or on the mountainous rim above the bustling port city of Bar, the chestnut canopy is dark, quiet, and cool. These unique groves are some of Europe’s largest. In autumn, visitors will find whole families collecting the fat, smooth nuts from the ground. The harvest is traditionally turned into mineral-rich flour and chestnut-purée cakes, and roasters roast whole nuts on street corners at night, often set up outside of mosques.