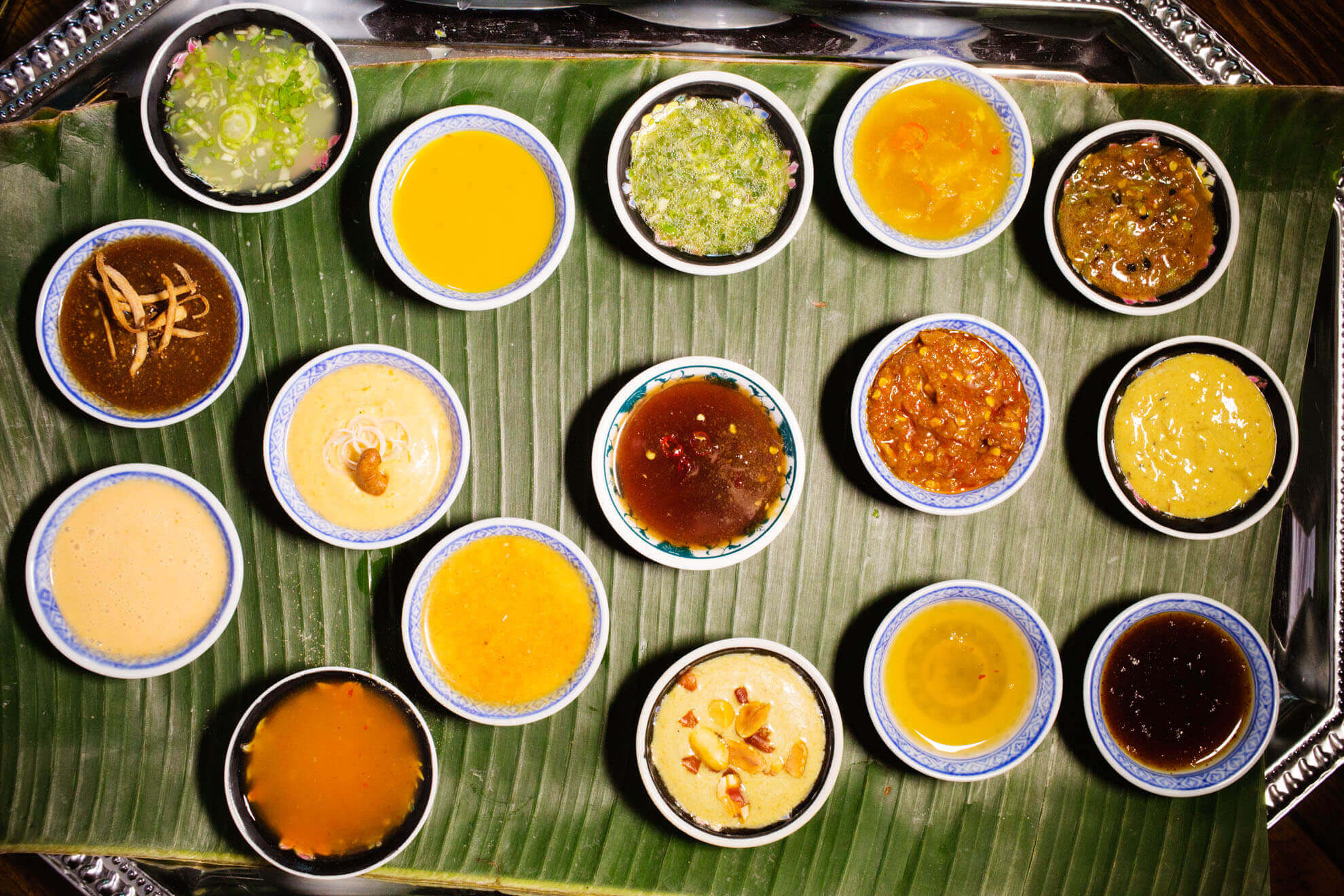 A primer on nam priks, nam jims, and curries—and how and why they’re used.

There are three major categories of Thai sauces: you have your nam priks, which are Thai chili pastes; you have your nam jims, which are dipping sauces; and then you have the curries. It’s not necessarily like French cuisine, where you have your five mother sauces and you’re able to derive variations from those—Thai food is very regional, and sauces can be different from household to household.

A woman may be known for a particular sauce; my mom’s thing is that she’s known for her jungle curry. It’s different than having a set of codified ingredients or techniques. When you sit down at a Thai table, you’ll always find four condiments sitting there: prik nam pla, which is chilies (prik) and fish sauce (nam pla); vinegar with chilies in it; white sugar; and ground chile powder. You are expected to doctor the food to your taste.

But there are definitely some uniting characteristics. For the most part, when it comes to nam priks, nam jims, and curry sauces, fish sauce is present. There’s traditional fish sauce that we’re used to seeing here, which is a clear brown liquid. But then there’s also something called pala, where there are actually chunks of fermented fish and it’s opaque and gray. In southern Thailand there’s another kind, I forget what the name is, but it’s basically fermented fish innards. So there’s always that umami coming from some kind of fish rot. Delicious, delicious fish rot. And then most of the sauces will also have red or green chilies and garlic.

Whenever a new server or host starts, their first day is in the kitchen so they can get to know these foundation sauces:


1 This nam jim is a sweet chile sauce. It has sweet chilies, hot chilies, vinegar, and garlic, and you’ll usually find it served with grilled or rotisserie chicken.

2 This is a basic nam jim for dipping seafood—steamed seafood, grilled seafood. It’s made with chilies, garlic, cilantro, lime juice, and palm sugar. It’s super lime juice-forward—that’s what you should be tasting.

3 This is another nam jim, a fish sauce caramel. It’s just fish sauce, sugar, and ground-up dried shrimp. You’ll get that a lot of times with green mangoes or other fruit, to dip. (We use it here for riblets, but that’s not traditional.)

4 This is Thai Sriracha. Here, we’re used to the green-top, red-rooster kind of thing, which is more Vietnamese in style. This is straight-out-of-the-bottle Thai Shark Sriracha brand, which is a little looser. I find it to be a little more balanced; the one in the green-capped bottle is just straight heat and salt. Si Racha is a town in Thailand—it’s an actual place!

5 This one is a roasted nam prik, where you get the depth of flavor from roasting the vegetables or grilling them over charcoal, and then chopping them up. We use bigger banana chilies, Thai bird chilies, lots of onion, lots of garlic, and then we also add tomatoes to it, which is a variation they do in Thailand. I just call it nam prik ampai because that’s my mom’s name, and this is her favorite nam prik. We serve it with a whole grilled dorade.

6 Here is a chili jam. It’s really hot. We serve it on the side of khao soi. In Thailand, people are crazy— they’ll just spread that on a piece of bread and eat it, or add it to tom yum soup, although I hear that’s not really a traditional way to do it. But a lot of people do it anyway.

7 This is shrimp paste nam prik, which I think is one of the oldest nam priks. It’s like a Thai version of bagna càuda, maybe. Lots of times you’ll serve that with just raw vegetables to dip, and probably some fried mackerel. It’s breakfast food; in my family’s house in Thailand, you’ll wake up and it’s fried mackerel, some vegetables, some steamed squash, and this.

8 This is our red curry. What makes it a red curry and not another curry is the combination and ratios of red chilies, shallots, garlic, coriander, kaffir lime peel, white pepper, and shrimp paste.

9 This is our massaman curry. The ingredients that set it apart from other curries are the peanuts, cumin, cloves, nutmeg, cinnamon, and cardamom—the rest of the flavorings will vary from family to family.

10 This one is a wild ginger curry—in Thai it’s called nam ya. It’s served over rice noodles. Wild ginger is different from normal ginger and has a different taste—it’s almost menthol-y, I would say. The curry also has salted mackerel in it, which gives it a bit of a funky punch.

This is the stuff I grew up eating, but we definitely tweaked them for the restaurant; we had to get some kind of consistency. Trying to extract recipes from my family was very entertaining. They’re like, Oh, you just make it. And when you ask for more, it’s like, Oh, you throw in a little fish sauce. When you finally extract all the steps and ingredients out of them, it tastes amazing. My classic example is with my mom’s recipe for garlic cookies, where she says, Oh, two cups flour! For years, I thought the recipe sucked and didn’t work. And then one day, I went home had her make it for me and realized that her “cup” was like this huge freakin’ latte coffee mug. And I’m like, Yeah, I get it, two cups. “Yeah, two cups! That’s what I said!”