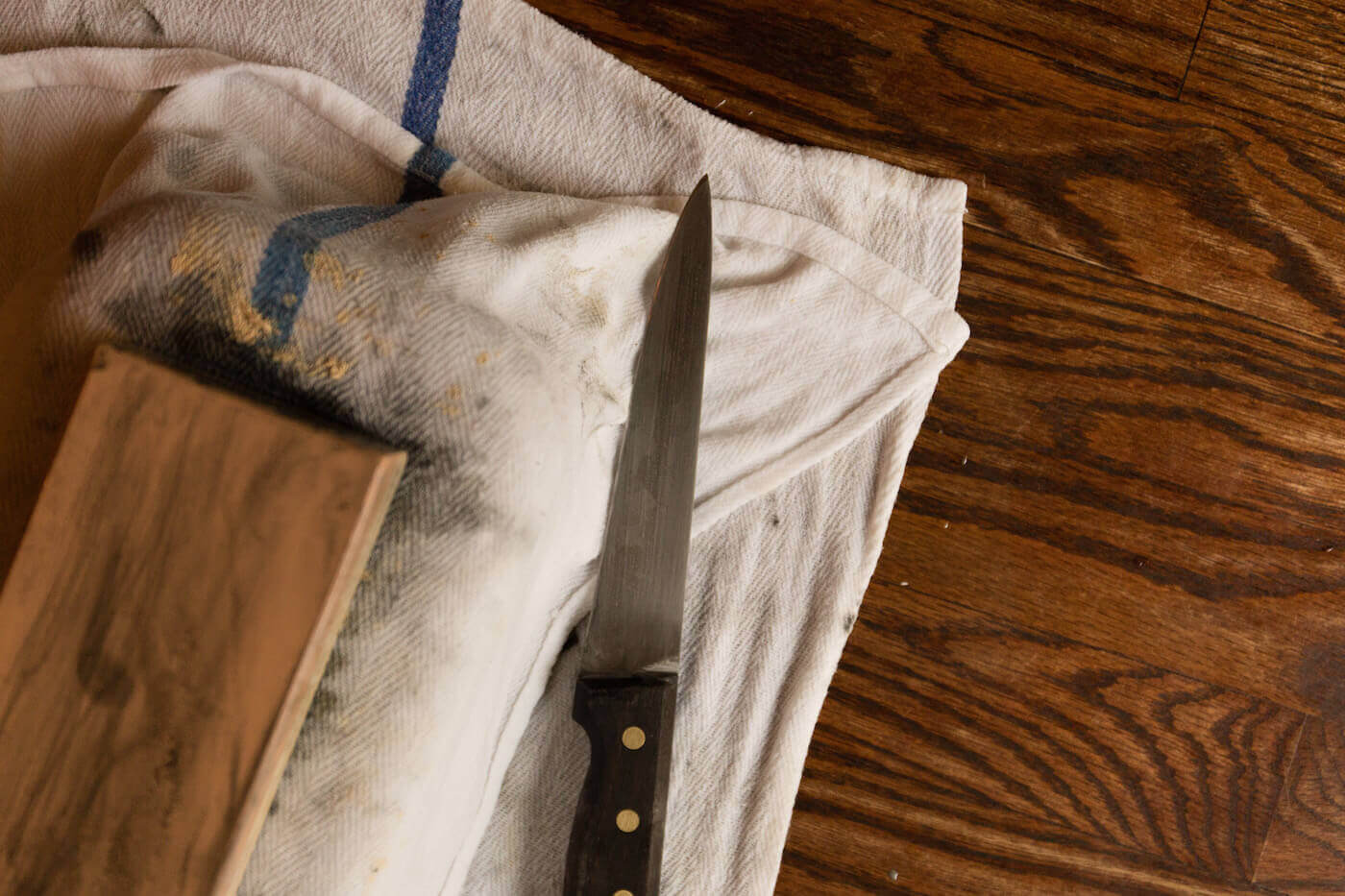 THE WAY OF THINKING

Whether it’s a cheap, twenty-dollar specimen or couple-thousand-dollar handmade custom one, knowing how to sharpen your knife properly is the most important thing. More important than the quality of the steel is your ability to maintain it. If someone’s cutting your hair with dull scissors, they’re going to do a very bad job, even if they’re using the best scissors in the world. It’s the same thing with a knife. You have to know how to maintain your tool for it to execute at a high level. What is the construction of the entire blade? How good is the metal, and how does it react on a stone?

The sharpest knife is not necessarily the best knife. A lot of people get obsessed with how fine their sharpening stone is and getting their knives as smooth and sharp as possible. You obviously want something sharp, but what matters more is matching how you sharpen your knife to how you’re going to use it.

Even though they appear smooth, all knives have micro-serrations. The more you polish it, the fewer micro-serrations there are. This makes for a smoother knife, which can feel sharper, but actually takes away the tactile feedback—meaning when you cut into something, you’re less able to really feel what it is you’re cutting into. In Japanese knife practice, you want a relationship between the product that you’re cutting, the knife in your hand, and your brain. The sharper and smoother an edge is, the less tactile feedback you’re going to get from the product.

When you use a stone, you’re essentially forming a new edge on the blade. To do this you have to form a “burr,” basically a thin ridge that hangs over the edge of the knife. You raise a burr by sharpening from the base of the knife bevel to the cutting edge, pushing metal up to the edge and over it. Then you flip the knife over and grind the metal toward the edge again, pushing the burr back and forth, until the new edge is formed.

A good starting point is always a medium-grit stone—somewhere between eight hundred and two thousand grits. (We’re going to start on a four-hundred-grit stone, but only because I want to do it quickly and I’m pretty adept at using stones.)

To start, make sure your stone is flat. This is important: the flatter the stone, the more even an edge you’re going to form. You can flatten your stone by grinding it with a diamond plate (the coarsest surface) or a more abrasive stone, moving in an X motion and some circle motions, adding a little water as needed. There needs to be a little bit of friction, so don’t overhydrate the stone—there shouldn’t be a pool of water on top. You want to smooth and level the top of the stone, but you also want to lower the edges a little bit. This helps the knife stay in contact with the stone as you sharpen it. Then you want to rinse it off.

To begin sharpening your knife, start by putting a little bit of water on top of your stone. Again, you don’t want a pool of water on there, because you still need some friction.

Hold the knife with your index finger on the spine, to help control the angle, and your thumb near the heel. Put the fingers of your other hand on the flat surface of the knife, just above the edge, and lightly press down to align the bevel with the stone.

A good trick for learning to properly align the blade is to draw along the edge of the knife with a Sharpie. Line the knife up on your stone and make a small movement. If there’s still Sharpie there, you’re not on the bevel. If there’s no more Sharpie, you’re on the bevel.

Everything is by touch and by sight. All you should be doing is keeping the blade in contact with the stone. The more even and consistent you are, the more finite of a point the edge is going to come to, and that means a more true edge, or a sharper edge. Make sure you have very good light to see what you’re doing and always use very light pressure. There are very few occasions when you should be using heavy or even mild pressure.

Once you’ve done that, move to a finer-grit stone. You can’t just jump from something super coarse to something very fine. If you do that, you’ll never fully smooth out those very coarse scratch patterns.

Everything you do from here is just a repeat of what you’ve already done: find the bevel, create the burr, flip, and smooth out the scratch pattern. Continue sharpening until you’ve brought the edge to as finite a point as possible. If you’re still hearing little metal sounds as your drag the blade, you need to keep going.

Most people would just stop here, but I like to strop on leather and felt to clean up any excess metal and strengthen the edge a little bit. Basically you still have this little tiny piece of metal that’s sitting on the edge and your knife isn’t going to cut very smoothly if it’s there. As you increase the grit of the stones, the burr will get thinner and will be easier to remove. To remove it, I first draw the knife through the felt pad to grip onto the edge and pull off any little particles that might be on there. Then I strop against the smooth leather to help remove any little metal pieces or burr that might be sticking on the edge. Do not pull the knife into the leather—just use consistent, no-pressure motions that trail the edge of the knife along the strop.