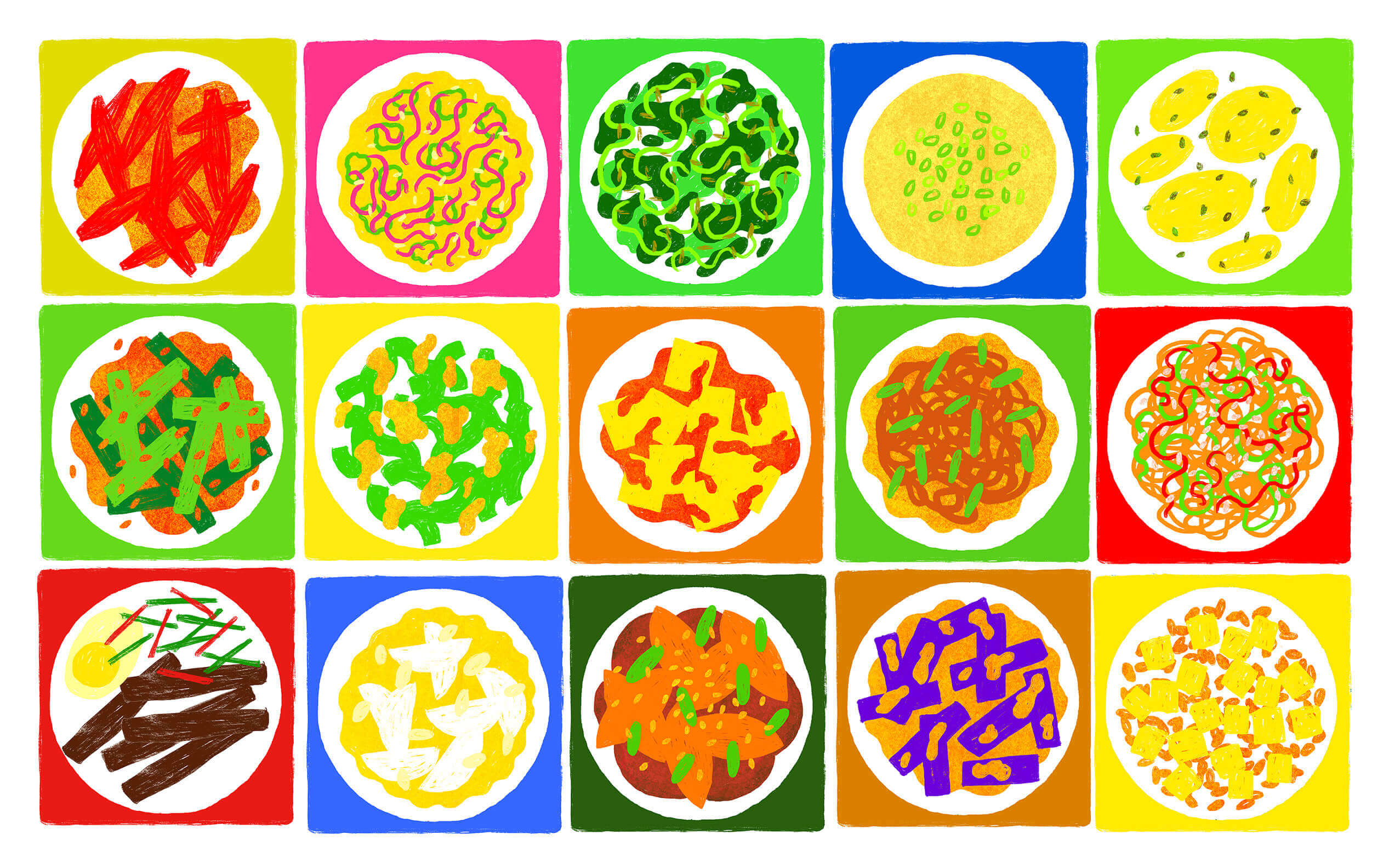 Banchan, the opening series of small plates that thump on the table with tommy-gun-like frequency to mark the beginning of a Korean meal, are not “free.” No, you’re paying for that baechu kimchi (cabbage kimchi) that has aged for six weeks in some faraway land (New Jersey, likely). You’re paying for the kongnamul muchim (seasoned bean sprouts) and the gyeran jjim (bubbling egg custard) and the tiny dried silver fish stir-fried with rice syrup and garlic. Those dried breadsticks served at strip mall red-sauce joints? Those are bullshit freebies.

Banchan translates to “side dishes,” and they are fundamental to Korean eating. That is, snacked on throughout the meal with great enthusiasm. Banchan is so important that restaurants should be judged by the quality of their banchan—and how often they get refilled.

The most commonplace banchan include various kimchis (cabbage, cucumber, radish) and seasoned vegetables called muchim, like blanched or steamed water spinach or bean sprouts tossed with sesame oil, soy sauce, sugar, and chili flakes. But there are also plenty of curveballs, like potato salad. And there’s a secret ingredient in that potato salad that I’ll tell you all about if you stick with me through this guide to banchan.

The Rules to Eating Banchan

I could be pedantic and drill down into which vegetable pairs best with which bubbling stew, and which pickled radish goes with which sizzling meat. But honestly, rules make eating less fun. My main thought about banchan is this: eat as much of it as you want, and mix it around with all the different dishes you order. Nobody is going to frown if you toss some kimchi into your soulongtang, or tuck a little dried squid into your mu ssäm.

While we will only cover a couple kimchis here, there are two hundred “kimchis of record,” according to Korea’s kimchi newspaper, the Red Lady. Napa cabbage is the best-known kimchi. It is the kimchi that you find in your local supermarket, placed atop tacos and at the center of the banchan flourish.

Brined and seasoned heads of napa cabbage are marinated in a purée of things like onion, ginger, garlic, Asian pear, fermented baby shrimp, gochugaru (coarsely ground red pepper flakes), sugar, carrots, and daikon. A great baechu kimchi can be eaten fresh, like a salad. Fermented for anywhere from a week to a year—the older stuff is used in soups and sometimes arrives as banchan, if you’re lucky—it develops some fizz, which dances on your tongue like seltzer.

The Persian cuke is often used in kimchi, as is the smaller Kirby variety. And they really take no time to pickle—twenty minutes in the sauce and they’re ready to eat. While oi kimchi doesn’t have the kick of a full-sour dill, there’s still a snap and crunch that is great to eat on its own, or combined with sweet bulgogi.

Daikon and Korean radishes are pretty similar (though Korean specimens are wider and slightly more vegetal), and both are used in this common kimchi. In our book we use a marinade of garlic, ginger, fish sauce, gochugaru, sugar, and Asian pear, which penetrates the radish’s thick skin with funkiness and heat, while softening during a few days of fermentation.

You are likely to find this more often in the summertime. Garlic chives are different than Western chives—flat, wider, and longer. The flavor is also more delicate. As a kimchi, they go great with grilled pork and in pancakes.

Unlike the spicy red kimchis, dongchimi is a white “water” kimchi. One of my favorite ways it’s served is in the form of a cold noodle soup at The Corner Place in Los Angeles. There, the recipe is such a secret that they don’t allow takeout. We think it’s a can of Sprite (sorry, Corner Place). The pickling liquid—consisting of salt water laced with apples, pears, onion, garlic, ginger, and that can of soda, left to ferment at room temperature for a week—serves as a broth for chilled somen noodles. It’s wonderful: sour but without an overpowering pop, a little sweet and spicy.

Okay, pull the paper bag away from your mouth. I know that this is not a traditional kimchi. My Koreatown co-author, Deuki Hong, made it up. One day while writing the book, we had some leftover marinade and decided to try it with canned pineapple. As a kimchi, it’s pretty good. Well, it’s the future—sweetness and tang and a slight funkiness. You can eat it with grilled galbi, but it’s really pretty legit on its own.

Raw daikon and garlic are pretty rough when eaten on their own, but when placed in a pickling solution of sugar, light soy sauce, and rice vinegar, good things happen. Wait, raw garlic by the clove? Ever spot that bottle of Scope in the bathroom of a Korean restaurant? Now you know why.

Do jalapeños grow in Korea? Hell no. But you will find them in many of the kitchens of Koreatown, as they serve as an apt proxy for the less hot, though equally vegetal, Korean green chili pepper. They are also great when quick-cured in soy sauce and rice vinegar.

On its own, blanched spinach is kind of a bummer. But, when tossed with sesame oil, soy sauce, and a touch of sugar, it becomes one of the more popular banchans around.

Stir-fried bean sprouts are not as boring as they sound. They’re actually really snackable, with the clean flavors of the sprouts married with the subtle sweetness of sesame oil.

Gim is the same thing as Japanese nori: seaweed. On the banchan table, it’s usually the toasted kind (which is great scattered atop a bowl of bibimbap). You might buy this stuff at Trader Joe’s and hoard it in your office desk. Not speaking from experience or anything.

I’m not a fan of this banchan really—I find it slimy and weird. Not all banchan is created equally. But some people really dig the union of soy sauce, sugar, sesame oil, and spongy eggplant.

When it comes to banchan, bokkeum-style means that they have been stir-fried over high heat and then brought back down to room temperature. When done with baby fish, the glaze of soy sauce, honey, and sugar forms a kind of fishy Cracker Jack. They’re sweet and sticky, with a very strong taste of the ocean. You might not enjoy eating what feels like a mouthful of fish food and cotton candy at the same time, but I absolutely love it.

You can find fish cakes sold both fresh and frozen at your local Asian grocery. Some have called them the “hot dog of the sea”—which we don’t really want to think about. As banchan, they are stir-fried with sugar, soy sauce, rice syrup, and gochugaru.

Shishito peppers are mild and a little sweet. You sometimes will come across a really hot one. Yahtzee! For banchan, they are tossed into an incredibly hot wok and charred, then tossed with tiny baby anchovies, soy sauce, mirin, honey, garlic, and gochugaru. Once cooled, they are placed on the table where they disappear in minutes.

An all-time banchan favorite. A pot of bubbling egg, swished around with anchovy stock. The texture is somewhere between poached and scrambled. If you dive in too quickly, you will suffer the consequences. I have suffered the consequences many times. After writing Koreatown, the roof of my mouth is Kevlar.

There are all sorts of jeon in Korean cooking. Sometimes they are served as full plates, but often you’ll be lucky and find them done as banchan (usually silver-dollar-sized). Sometimes jeon are made with egg, sometimes with rice or ground soybean flour, and sometimes with potatoes and all-purpose flour. Note: Jeon sauce is imperative for dipping. It’s equal parts soy sauce, rice vinegar, and sesame oil. Make sure the waiter brings it.

An incredibly flavorful plate of beef that has been slow-braised in mirin, soy sauce, and sugar. It’s so flavorful that it’s eaten in small quantities, which is perfect for banchan. The beef is also served with soy eggs.

Tofu is a sponge, and it’s the best kind of sponge when it’s been braised and cooled in a rich soy sauce and mirin.

In the NBA of Asian noodle dishes—where ramen is the Warriors (top dog) and laksa is the Hawks (scrappy and overachieving)—Korean japchae is the Pelicans. Wait, where do the Pelicans play? Exactly. But, really, japchae is so good, and often featured as a banchan. It’s made with sweet-potato noodles called dangmyeon, sautéed with soy sauce, mirin, mushrooms, and sesame oil.

Raw crabs are called ganjang gejang (“crabs marinated in soy sauce”) and its spicier cousin yangnyeom gejang are equally delicious and messy—and kind of a hard sell to the uninitiated. Basically, still-living crabs are thrown into a bowl of soy sauce, vegetables, and finely ground gochugaru. They die in about an hour, then sit in the fridge for a few more days and marinate in their own juices. Pull them out. Crack into the sweet meat. There is nothing better. If you find these served as a banchan, it’s your lucky day.

You made it to the banchan denouement: potato salad. It’s been a banchan staple for decades. But, why? I could possibly dive into this deep, like Dana Goodyear, but in brief, potato salad is both accessible (everybody likes potato salad!) and cheap to make (potatoes are like a nickel a pound). But potato salad Korean-style is sweeter and creamier than those made with mustard. The key to that sweetness? A splash of a saccharine yogurt “drink” sold under the name Biofeel or Yakult.